Father Jim Bradley, SJ, has taught and served in leadership in Jesuit high schools. He was provincial of the former New Orleans Province and superior of Jesuit communities. But the job he has found most fulfilling is the one he has now: director of St. Alphonsus Rodriguez Pavilion in Grand Coteau, La. The Pavilion is one of two communities in the Jesuits USA Central and Southern Province that provide care for senior and infirm members of the province. Father Bradley manages the 22-bed assisted living and nursing facility. He has some of the duties of a superior, but mainly, he’s the director of a health care facility.

“When you become a superior, it’s important to earn each man’s trust,” Fr. Bradley said. “It’s what good teachers do, develop a relationship with each person so that they can learn. I try to do that with every Jesuit who comes to the Pavilion. I want to earn their trust, so they’ll accept the support they need.”

One of the ways he helps both the Jesuits and the community is through repair work. “It’s amazing the number of small repairs canes, walkers and wheelchairs require,” he said. “Maintenance and repair work have always been my therapy.” One of the larger projects he has taken on in Grand Coteau was moving and rebuilding the concrete post and pipe fence around the Jesuit cemetery.

Nov. 1 will be Fr. Bradley’s 10th anniversary in this assignment. Early in his ministry, he taught at Jesuit high schools in New Orleans and Shreveport, La., and served as principal in Shreveport and Tampa and president in Tampa. He was the associate director and, later, director, of the Jesuit Secondary Education Association’s Commission on Research Development (CORD). CORD’s principal mandates from the U.S. provincials were to develop training programs for leaders of Jesuit secondary schools and to help the schools develop curriculum, especially to reflect Jesuits’ concern for faith and justice.

Father Bradley was instrumental in developing the Profile of a Graduate of a Jesuit High School. The Profile is a list of the qualities Jesuit schools hope their graduates exhibit: Open to Growth, Intellectually Competent, Religious, Loving and Committed to Justice. Later, CORD developed the Curriculum Improvement Process to help schools develop a curriculum that would impart the qualities described in the Profile. CORD eventually developed an instrument to help Jesuit schools evaluate their community service programs. Many other Catholic schools have used this tool.

After 11 years at the Jesuit Secondary Education Association (JSEA), Fr. Bradley returned to Jesuit High School, Tampa, as president, but he continued to be involved in work that benefited all Jesuit schools. In addition to his work with CORD, he served on the JSEA Board of Directors on three occasions and served for six years as the chairman of another JSEA commission which worked with the presidents and principals of JSEA schools.

And yet, he says, “My current assignment is my favorite as I accompany my Jesuit companions along their final pathway to Heaven. Shortly before Jesus began to walk the path that led to his death on the Cross and Resurrection, he effectively told his apostles, ‘He who serves best leads best.’ So, I focus on serving the men in the Pavilion, trusting that the leadership will fall into place.” 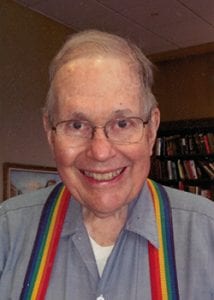 "My current assignment is my favorite as I accompany my Jesuit companions along their final pathway to Heaven."