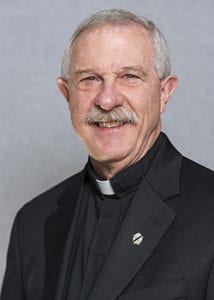 “If they need a ride, I’m their guy,” Brother John Fava, SJ, says of retired Jesuits who can request his help in getting to their destination from the Jesuit Hall community at Saint Louis University.

Living his ministry from the front seat of a car may seem very different from the inside of a chapel, but Br. Fava’s ministries are just a little out of the ordinary. Not only does he help transport older Jesuits, he has also spent decades riding along with police officers on their calls in St. Louis and Denver.

During his time at Regis Jesuit, when students attended a two-week mini-course at the Police Academy, Br. Fava was invited to ride along for the first time. He enjoyed it so thoroughly, he kept volunteering to ride along for nine years, even before there was a chaplaincy position available. When a position opened, he applied and served 13 years as the police chaplain in Denver. When he moved back to St. Louis, he immediately sought out a way to continue this ministry.

As a volunteer police chaplain, Br. Fava rides with officers as often as he can. That way, he knows the officers who serve the city, and the officers know him. His is truly a ministry of presence. He has served as a St. Louis City Police Chaplain for 15 years; two years ago, he began serving as chaplain for the Saint Louis University Department of Public Safety.

“I consider this a great, great honor,” Br. Fava says of his chaplaincy, especially doing the benedictions for department ceremonies. Among these is the annual candlelight vigil and memorial for officers killed in the line of duty in Missouri, at which he has offered the invocation for nearly a decade.

Brother Fava tries to meet officers wherever they are in their spiritual life, but he never forces his religion or beliefs upon them. As a St. Louis native, he says, “I never bring up anything except the Cardinals!”

He carries out a ministry of presence at other times, too: at the police station, of course, with prayers and fist bumps before officer deployment, but also at weddings and funerals. His ministry embodies the Ignatian impulse to be all things to all people, because “You never know when something is going to pop up; you have to be ready for anything.”

He is grateful for the flexibility the brotherhood allows, which allows him to be available for a conversation, a prayer or a ride, at almost any time: “That’s why I do it.”

Brother Fava sought out the Society of Jesus, compelled, initially, by the desire to teach and to be a priest. During his regency, he was called to become a brother. Through his 20 years as a Spanish teacher at Regis Jesuit High School in Denver, he felt a strong desire to meet the needs of friends and family, asking him to celebrate weddings, funerals and baptisms. Answering God’s call, he was also ordained a permanent deacon.

Brother Fava is joyfully aware of the “limitless opportunities for brothers.” Recalling the Jesuit brothers that were role models for him, and his own varied ministries, Br. Fava said, “Brothers can do anything and everything. They’re not limited by being a brother.” To any young Jesuit discerning the brotherhood, he encouraged, “Go for it.”

Living his vocation back in his hometown, Br. Fava humbly affirms, “This is my way of serving God, the Church, the Society; this is what God has called me to do, and I feel blessed to serve.”