For more than three decades, Fr. Bill Snyders, SJ, served in a variety of ministries in the Central American country of Belize. Last summer, he moved to the St. Alphonsus Rodriguez Pavilion in Grand Coteau, La., where he ministers to infirm Jesuits. He also works part-time at St. Charles Borromeo, the Jesuit parish. But a piece of his heart remains in Belize.

“I can’t easily extricate from my work and relationships in Belize,” he says. “For instance, I was working with a man in his conversion to Catholicism. I am part of his life; he is part of mine. I am bound by strings, if not ropes. You can’t just pack up and say goodbye forever.”

During his final 12 years in Belize, Fr. Snyders worked in the alcohol and drug rehabilitation center at Belize Central Prison, the sole correctional facility in the country. “I was invited to put a spiritual twist on the 12-step program,” he says. “Belize Central Prison is unique. From the administration to the guards to the structure, the whole tenor of the place is rehabilitation.”

The prison is operated by the Kolbe Foundation, named for St. Maximilian Kolbe, the Franciscan Friar killed in Auschwitz during World War II. The faith-based foundation has transformed the prison into a place that prepares inmates to lead productive lives when they leave. One vital component: establishing the Addiction Rehabilitation Center and inviting Fr. Snyders to develop a program specifically for the prison population.

“Twelve-step programs are already based in spirituality,” Fr. Snyders says. “I added a scriptural foundation and an emphasis on Christ’s role in redemption. The atmosphere of the prison corroborated what I was doing. It was the most joyous environment I’ve ever taught in!”

He estimates he worked with at least 1,200 men in small groups during his years at the prison, a high percentage of the population. “I enjoyed helping them get out of the chaos of their lives,” he says.

In Grand Coteau, Fr. Snyders spends 2-3 hours each day in pastoral ministry to infirm Jesuits. In the parish, he helps with the Confraternity of Christian Doctrine (CCD) program, typically with young people who do not go to Catholic schools, but also with families coming into the Church. Many of these families are already Catholic but have not actively practiced their faith. His goal is to help them deepen their understanding, knowing this will enhance their relationship with God.

Father Snyders describes his approach as presenting a catechesis where the pieces of a puzzle fit together – Church, liturgy and the sacraments. It’s not unlike his focus in the prison.

“I try to give them a much larger perspective of their Christian faith,” Fr. Snyders says. “There’s real substance in our conversations. If people don’t really connect with how the sacraments impact their lives, then it’s just an event. We’re striving for a more adult faith.”

He’d like to return to prison ministry. “That’s where my heart lies,” he says. But prisons in the U.S. do not typically aspire to rehabilitation of prisoners. Masses are rare at the prison in nearby Lafayette, La., so he is investigating other opportunities for service, recognizing he has to be patient.

“Things are starting to come into focus about how I can serve,” he says. “I just have to find the opportunities.” 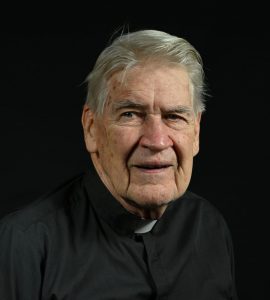 "Things are starting to come into focus about how I can serve. I just have to find the opportunities."

Kathy Juhas: Committed to Doing God’s Will
Thirty-three years after she arrived at Jesuit High School, Kathy Juhas still wakes up every morning excited for the day to come. Some might get burnt out after spending more than three decades at the same workplace, but Juhas does not – because she is doing what she feels is God’s will – and that, to her, is what’s most important in life.
Story
Faith, Intellectual Rigor Coexist in Jesuit Vocation for Bill McCormick, SJ
Bill McCormick, SJ, considered a religious vocation from a young age. An accomplished student, he found himself always thirsty for knowledge. Eventually, he discovered that a Jesuit vocation would allow for the two to coexist, and even complement each other.
Story
Donor Profile: Skeeter and Stephanie Morris
Influence, Inspire, Ignite. These words, found on banners which line the beautiful Avenue of the Oaks on the campus of Spring Hill College, succinctly describe the effect the Jesuits have had on the lives of Edward (‘Skeeter’) and Stephanie Morris of Mobile, Ala., benefactors of the province since 1986.
Story
Scroll to Top
X
Tweet
Share
Pin