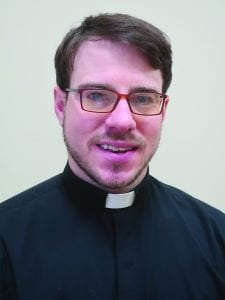 Cura Personalis in the Classroom
(2020) Daniel Everson, SJ, recognizes his students at Arrupe Jesuit High School in Denver are doing more than going to class. They’re figuring out what kind of person they want to be.
“The young people that I teach, they’re navigating big questions,” Everson said. “Do they want to be academically engaged? Do they want to be a person for others? Do they want to be a person of faith?”
As a freshman theology teacher, community service coordinator, baseball coach and liturgical music coordinator, Everson recognizes he, too, is doing more than teaching. “To be a role model for them is the most fulfilling thing I’ve ever done.”
A Jesuit high school alum and the son of a theology teacher, Everson chuckled about the many connections within his vocation. “I was baptized in Jesuit Hall, in that little chapel at the corner of Grand and Lindell Boulevards,” said the St. Louis native. “I like to think that sealed my fate.”
In December 2010, at a Come and See Retreat at Jesuit Hall for the Dominicans, Everson chatted with Jesuits in the cafeteria line. One encouraged him not to forget the Jesuits during his discernment. More than two years later, Everson returned to Jesuit Hall for another Come and See, this time with the Jesuits.
“That was when it dawned on me, after evening prayer, that I was probably sitting in the same chapel where I was baptized. I was home.”
His assignment at Arrupe Jesuit isn’t Everson’s first time in front of a classroom. After university studies, he joined the Alumni Service Corps (ASC) and taught at De Smet Jesuit High School in St. Louis. “For the first time in my life, all of my work and energy was geared toward other people succeeding.”
But opening his grade book and seeing 110 names of students he wanted to thrive came with challenges. “I was working as hard as ever,” he recalled, “and it was all for others. That brought me more joy than pursuing my own success.”
While a student at St. Louis University High School, Everson learned from Fr. Dick Hadel the full mean of “cura personalis.” When students got revved up about the St. Louis Cardinals going to the World Series, “Fr. Hadel could acknowledge that Spanish class was not the only thing going on in their lives.”
Everson also remembers Hadel’s compassionate response to a student acting out in class, taking time to understand what was going on in the student’s life to compel him to misbehave. It’s an approach Everson now takes, especially given the multiple stressors students at Arrupe might face.
“Poverty has its way of intruding and interfering,” he explained. “But we try to assume there’s a good explanation for issues that arise. We try to ask, ‘What’s happening in their life that might be causing this?’”
Everson also appreciates the Cristo Rey school’s focus on student growth. “Like all of us, students are children of God with gifts that deserve to be nourished. We’re not here because of disadvantages; we’re here to build strengths.”
From Everson’s perspective, the classroom is a place of mutual, joyful interaction. “We laugh, too,” he said about his classes, “I think it’s important for students to see how funny and human teachers can be.”