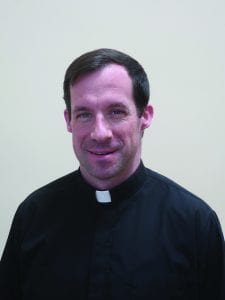 (2019) New Orleans born and bred, Jordan Jones, SJ, is a graduate of not only Jesuit High School, but also the grade school at Holy Name of Jesus Parish, where his faith formation began. His is not a story of a lifelong calling to the priesthood, however. Instead, he always knew he wanted to serve in the military. He launched that career at the United States Naval Academy.

“The Academy was the first place I lived that was not culturally Catholic,” Jones said. “I began to get questions from my classmates – ‘Why do you worship Mary?’ – that sort of thing. It forced me to look at my faith in a different way and really take ownership of it.” Naval Chaplain and Jesuit Fr. Bob Keane supported Jones during this process as he grew in his faith.

As he drew near to graduation, Jones began to consider the possibility of a vocation to the priesthood, but he had places to be: he owed the country five years. He was accepted into the United States Marine Corps and completed additional training at Quantico Marine Base in Virginia before becoming an infantry officer in 2006. He was deployed to Iraq for seven months in both 2007 and 2008. He served as a rifle platoon commander in charge of 40 other Marines. He later served as a platoon commander in Okinawa, Japan, with yet another deployment, this time to Afghanistan.

He found his life in the Marines fulfilling: it was mission-oriented and completely absorbing. He also learned to be a servant-leader, he says, quoting the Marine saying of “Officers eat last.”

Through God’s grace, Fr. Keane was stationed in Okinawa for the same two-year stretch Jones was there. “He helped me gain better perspective on my life in the military and grow stronger in my faith,” Jones said.

After his 2010 deployment to Afghanistan, Jones began to feel a strong call to the priesthood, but ultimately determined the time was not yet right. He had opportunities for further service and advancement in the Marines.

In addition to prayer and the sacraments, experiencing combat impacted Jones’ discernment of his vocation. “I saw true evil,” he said. “Seeing people do completely irrational things to harm other people made me realize that the force of evil is a real thing. And I began to wonder if God was calling me to combat this evil in a different way, through the priesthood.”

Jones left the Marines in November 2014 and attended a discernment retreat through this province. He entered the Society of Jesus in August 2015. He recognizes there are similarities between his life as a Marine and his life as one of “God’s Soldiers.”

“I loved the experience of brotherhood, of living and working with people you depend upon,” he said. “I learned in the Marines that mission accomplishment is my responsibility. Just like in the Marines, when the mission was determined by others above me, now the mission isn’t mine, it’s the Church’s. We’re all in this together – priests, religious, laity.”

Jones is in philosophy studies at Saint Louis University.