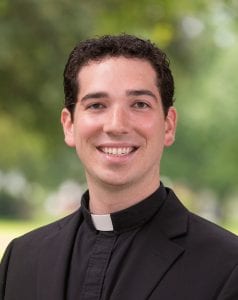 (2017) Cruising the streets on a motor bike, Michael Mohr, SJ, stood out as a tall white man in Vietnam where he spent nine weeks teaching English to Vietnamese Jesuits. He sometimes received stares, but the people he encountered there were incredibly welcoming, and it was all part of his own learning experience.

“One of the greatest parts of my Jesuit life is the opportunity to grow through laboring in the world with Christ,” Mohr said. “To be able to share my experience as a teacher and place myself at the disposal of the Church – it’s amazing what God uses when we make ourselves available.”

Mohr is grateful for the privilege to encounter the faith of people in four different countries during his four years of formation. As a Jesuit, he has travelled to Nicaragua, Guatemala, Guyana and Vietnam, to serve and to learn. He is getting a real sense of the universality of the Society and sees these experiences as a gift and foundational to his formation.

In Guyana, he was struck by the deep desire of the faithful to grow in their understanding of Catholicism. As a novice, he felt unprepared to lead them, but “Jesus was there, leading the way, and I knew I could do it with Him,” he said, thanks in part to his experience of the Spiritual Exercises.

Mohr continues to seek opportunities where he is challenged to grow in spaces with which he is unfamiliar. “These are the places,” he says, “where faith is not taken for granted, where people who long for the sacraments and spiritual support may only receive them a few times a year. It has brought alive the reality of the universal church and the needs of our fellow Catholics around the world.”

Mohr grew up in Baton Rouge, La., and graduated from Catholic High School. There, he encountered the beauty of religious life driven by a mission, and “something began to work in me.” After studying English at Millsaps College, Mohr taught at a Catholic high school in Mississippi under an encouraging principal who prompted him to explore the restlessness he felt. It was a Christian Brother who knew Mohr well who pointed him to the Jesuits. After three years of discernment, he entered the Society of Jesus in 2013. “I knew the call I felt was something I had to explore further.”

Mohr recently began his final year of philosophy studies at Saint Louis University, and is looking forward to his third year at Bellarmine House, the community for Jesuits in formation in Saint Louis. His international experiences have helped him discover things about himself that open new possibilities for future ministries. He’s grateful for the support of his community and superiors who support him, knowing they will make wise decisions regarding his assignments. “When I go to these places, I try to make the most of my time,” he says. “There’s a real mission, a mission of not necessarily bringing Jesus, but rather a shared uncovering of Christ at work in our lives together. It’s not me choosing to go; I am being sent. I’d like to be that kind of Jesuit: whatever is asked of me, I can accept and I will go.”