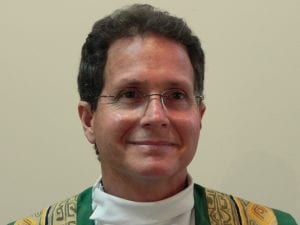 Walking with Others in the Amazon

After three decades of service in Brazil, Fr. David Romero, SJ, muses that no two days are the same. One day, he could be corresponding with Jesuits across the globe from his office in Manaus, and the next, he might be making his way to visit rural communities in the Amazon region.

Father Romero serves as the delegate for the Apostolic Preference of the Amazon region. Each day, he feels honored to be directly living out Pope Francis’ appeal in Laudato si’: to care for our common home. He enjoys advocating for the protection of the Amazon with his partners in mission.

Father Romero finds the Society of Jesus’ new Universal Apostolic Preferences (UAPs), which include caring for the planet, to be as inspiring as the Holy Father’s encyclical. “All of these have been confirmation that I’m in the right place at the right time,” he said. “This gives me energy, focus and enthusiasm.”

Father Romero’s hometown of New Iberia, La., is a world away from the Amazon region, but his home fostered in him the love for nature he embraces today. “I grew up in south-central Louisiana on the Bayou Teche where I developed a great love and respect for the outdoors, nature and God’s creation.”

He was also encouraged by the Bishops’ Synod for the Pan-Amazon region, which promoted “the value of learning from the traditions and customs of the indigenous people in caring for our ‘common house.’”

Father Romero’s assignment requires regular travel, which connects him to the image of Ignatius as a pilgrim. “Whether I’m on a plane or a bus, I feel very much accompanied by the Lord,” he said. “I put my travels in his hands, and it usually works out for the best.”

His travels have also engendered a deep appreciation for people, their cultures and traditions.

While his travels do not always go as planned, he remembers with appreciation the moments of graceful accompaniment that have risen out of canceled flights. “The posture of listening,” he said, “is giving value to other persons, their history, journey, culture and difficulties.”

As the regional superior, Fr. Romero accompanies his 34 Jesuit brothers in the Brazilian Province. He ministers to lay colleagues and other religious, and he feels particularly pulled toward the ministry of accompanying those in border regions.

Romero helped to develop a ministry for Haitian immigrants who were seeking refuge after the 2010 earthquake that killed hundreds of thousands of people. “The travelers arrived exhausted after several days of travel through Ecuador and Peru to Brazil,” he said. “Even though I was with them just a short while, sharing bread and some coffee, it was a powerful experience to accompany the Haitian migrants on their journey through the frontier zone.”

Father Romero’s pursuit of the service of accompaniment has taken him throughout Paraguay, Peru, Bolivia and Brazil, in urban and rural regions, living in densely populated cities and small villages. He looks forward to helping lead a retreat for his fellow Jesuits in St. Louis this June. “I look forward to reconnecting with Jesuits, as well as sharing the perspective from Brazil on the Spiritual Exercises and the UAPs.”