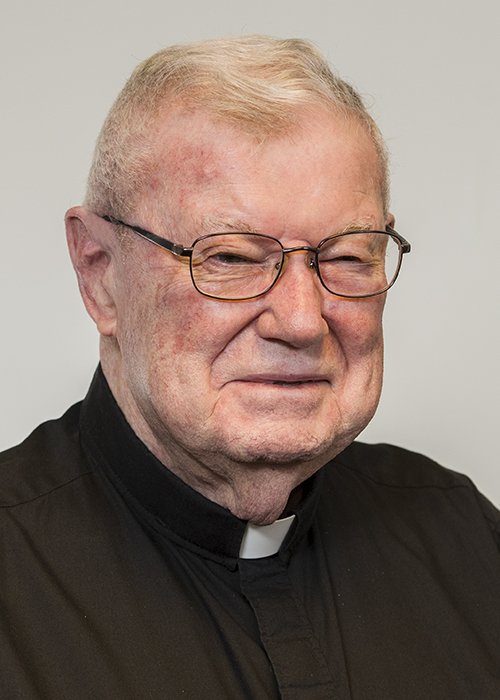 Father Donald Cunningham, SJ, has been a member of the Society of Jesus for 70 years.

He began his apostolic ministry at St. John’s College in Belize, where he taught English, Latin and elocution. Between 1962 and 1972, he served as a chaplain and guidance counselor at high schools in Topeka, Kansas and Chicago. From 1967-69, he also lectured and did research at Loyola University of Chicago.

From 1969 to 1975, he served as assistant to the vice president, dean of faculty at Loyola.

After completed his Ph.D. in education testing and research in 1975, he served as assistant dean of the Foster McGaw Graduate School at the National College of Education.

He served at Saint Louis University from 1977 to 1982, directing the premedical and predental programs. He then served in a similar role for Jesuits studying in Chicago.

Beginning in 1986, Fr. Cunningham was assigned to a series of pastoral roles in Denver, Englewood, Colo., Maywood, Ill., Winfield, Ill., and Pana, Ill. He was the treasurer and business manager for the Jesuit School of Theology in Berkeley, Calif., for three years, 1992-95.

For much of the 2000s, he was a retreat and spiritual director at White House Retreat in St. Louis, then was assigned to pastoral and retreat ministry at Jesuit Hall, where he has been since 2009.