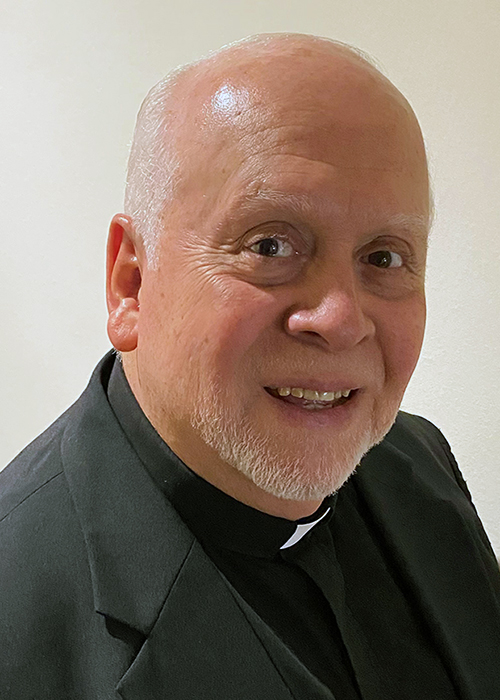 Father Salazar was born June 30, 1944, in San Antonio, Texas, a descendant of colonists, founders of San Antonio over 300 years ago in the era of world exploration by the Spanish and Portuguese, among other nations.

He entered the then-New Orleans Province of the Jesuits in 1962 and was ordained a priest on June 22, 1974, at Our Lady of Guadalupe Church in Helotes, Texas.

During his diaconate year and the first year after his ordination he served the Azorean Portuguese immigrant community and Chicano university students in the San Jose-Santa Clara area of California while finishing a Master of Divinity at the Jesuit School of Theology in Berkeley. While there, he also was co-founder of an International Formation Program for young Jesuits, leading them through cultural and linguistic immersion summers of theological and pastoral reflection in Mexico from 1974-78.

From 1977 to 1988, he advocated on behalf of Hispanic laity, seminarians, religious women, religious brothers and priests as Regional Director of PADRES [Priests Associated for the Religious, Educational and Social Rights] of Mexican Americans in Texas, Oklahoma and Arkansas.

From 1975 to 1987, he served as an associate pastor in Jesuit parishes in Houston and El Paso, Texas, and then was named the first native-born pastor and superior of the Jesuit community at the Regional Shrine of Our Lady of Guadalupe in San Antonio from 1980 to 1987.

Father Salazar was missioned to Ignatius House Jesuit Retreat Center in Atlanta in 1987 and served there as a retreat director for two years. He was then asked by his provincial superior to serve the Archdiocese of Atlanta as its first Episcopal Vicar for Hispanics from 1988 to 1991. During that period, he began the vocations program for people from Latin America (Colombia, Mexico and Puerto Rico) for the Archdiocese of Atlanta.

From 1989 to 1992, Fr. Salazar served as co-founder and first President of ANSH, EEUU (the National Association of Hispanic Priests in the USA).

From 1991 to 1994, he founded and served the Hispanic Outreach Mission of Our Lady, Mother and Queen of the Americas in Dothan, Ala., and served the Archdiocese of Mobil by ministering to more than 20 cities and towns in the tri-state area of Georgia, Alabama and Florida.

In 1994-95, he lived his sabbatical year on pilgrimage to Our Lady’s Shrines and ministered to the families of immigrants in the USA in their lands of origin. He visited and gathered for Eucharist the relatives of families he had earlier served in the United States. He traveled to all the Spanish-speaking nations [except Uruguay], also visiting his fellow Jesuits on mission in Brazil.

From 1995 to 2006 Fr. Salazar served the church as a NACC-certified Hospital Chaplain, in Temple and Corpus Christi, Texas.

Throughout his 60 years as a Jesuit, he has focused much of his ministry on parish-based community organizing, the advocacy and defense of immigrants and the poor while preaching a faith that does justice.

He served a second time in Atlanta at Ignatius House Jesuit Retreat Center from 2007 to 2011 as a retreat director and spiritual director. In addition to preaching retreats in English, Spanish and Portuguese, he enjoyed community outreach and celebrating Mass in English, Portuguese and Spanish in archdiocesan parishes when needed.

Fr. Salazar was assigned to Montserrat Jesuit Retreat Center in 2011. He celebrated his golden jubilee year, 50 years a Jesuit, during 2012, enjoying the gift of a 21-day trip to China. In September of 2015, he moved to the Jesuit Hall Community on the Saint Louis University campus in St. Louis to begin hospital and other pastoral ministries, which he continues to the present day. This year on Sept. 25, he will join his companions celebrating their jubilees in the Society of Jesus.

Father Salazar’s Reflection on 60 Years as a Jesuit:

As I reviewed this year’s list of jubilarians, I was immediately filled with gratitude for what we have been able to do by the grace of the Risen Christ.

I recalled my many assignments – how, through dialogue, discernment and prayer, I have ministered in over 25 places/spaces.

This has meant trusting God these past 60 years, gradually recognizing that he is continually shaping my life, personality and vision.

An anonymous email message shared with me: “I don’t know who you are, but a LOT of people LOVE YOU!” I welcomed the sentiment and words with humility, and with gratitude that is a constant thread in the fabric of my life.

Someone penned the words, “I love that for you.” Friends and family members have spoken in similar words, as they celebrated with and for me the many events in my Jesuit life, from the day of entrance into the novitiate on August 29, 1962, at the tender age of 18, as I boarded the Sunset Limited train headed for Grand Coteau, La.

They were telling me I am a chosen instrument in the unfolding of God’s Plan (as I ponder the words of the young prophet Jeremiah in Chapter 21, 11-13: “For I know the plans I have for you…”)

To these words I have gratefully responded, “here I am, send me,” as I understood the mission to “go out to all the world and tell the Good News.”