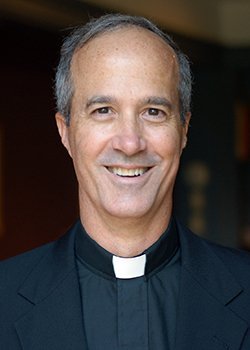 Father Bentley Anderson, SJ, completed his undergraduate degree and served his country for five years before deciding to dedicate his life to service of the Lord as a Jesuit. This year, he celebrates the 25th anniversary of his ordination as a Catholic priest.

In 1986, he entered the Society of Jesus, studying at Loyola University New Orleans before completing teaching for two years at Spring Hill College in Mobile, Ala., and studying theology at Regis College in Toronto.

Following his priestly ordination in 1996, Fr. Anderson returned to Boston College to complete his Ph.D. in history in 2001.

He then began his career as an educator as an assistant professor of history at Saint Louis University, where he remained until 2009.

Looking back on 25 years of priesthood, I have to ask myself: how is it possible? It doesn’t seem as though that many years have passed, and yet they have. Serving the people of God as a priest has been the most rewarding experience of my life. Preaching the Word, reconciling the penitent, comforting the ill, or celebrating life have all been grace-filled moments for me. To be part of so many lives on so many levels has allowed me to see and experience the working of the Spirit in the world. It is life affirming. And I hope, in some small way, my priesthood has allowed people to see and experience the living and loving presence of our God in the world.

And while the sacramental life of my priesthood has brought me great consultation, it is my academic life that has brought me the greatest consolation and affirmation of my priesthood, allowing me to engage students in matters of faith and justice, specifically in the area of race and religion. It is through researching, publishing and teaching that I have discovered the hand of God working through individuals, striving for peace and justice, foreshadowing the coming of the Kingdom of God.