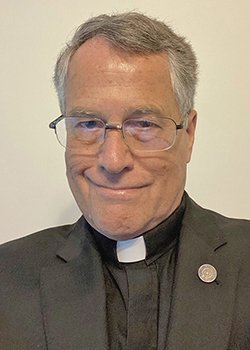 Father Frank Reale, SJ, has been a Jesuit for 50 years.

He began his Jesuit ministry teaching religion and directing the pastoral program at his alma mater, SLUH.

From 1988-2003, he helped in the administration of the former Missouri Province, first as a vocation director and then as a provincial assistant for formation and secondary education. From 1997-2003, he served as provincial.

In 2004, he was assigned to Saint Louis University as chaplain of the law school. Beginning in 2006, he became vice president for mission and ministry, a role he filled until 2011. From 2008 to 2011, he also served as rector of the school’s Madrid campus in Madrid, Spain.

Since 2020, he has served as a retreat and spiritual director at White House Retreat in his hometown of St. Louis.

Fr. Frank Reale’s Reflection on 50 Years as a Jesuit

2021 is a year full of “zeros,” insofar as it marks my 70th birthday, my 50th year as a Jesuit, and my 40th as a priest. Mindful of the stereotypical advice of a mother to her children — “watch the company you keep” — I am very grateful that these years have not been empty but have been filled with a rich company consisting of family and friends, as well as of those who I have been privileged to live with and minister to as a Jesuit. Collectively, they have graced me with a satisfaction and peace, a sense of “rightness” about my life, which has enabled me to recognize God’s workings, even in particularly difficult and challenging situations. I am reminded of the words of Dorothy Day, “What else do we want, each one of us, except to love and be loved, in our family, in our work, in our relationships?” Again, I am grateful.