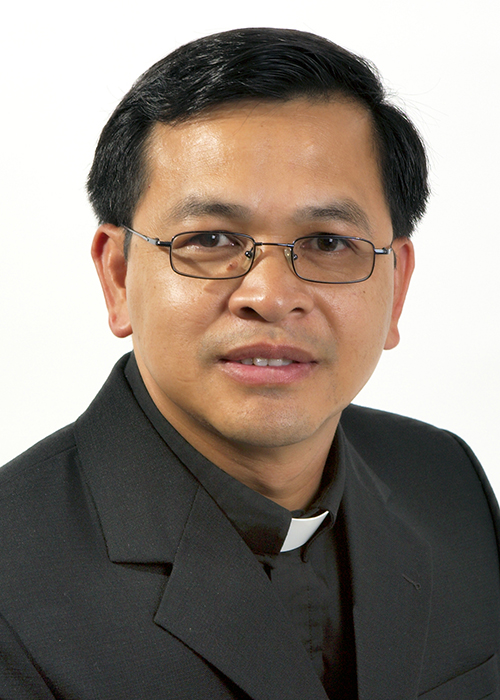 Father Hanh Pham, SJ, has lived and served in Colorado for much of his life. Originally from Lam Dong, Vietnam, he has been a Jesuit for 25 years. He entered the Society of Jesus one year after graduating from the University of Colorado at Denver with a bachelor’s degree in psychology/sociology.

Father Pham has been giving retreats and providing spiritual direction at Sacred Heart Jesuit Retreat House at Sedalia since the summers of 2012-2015 and has served there full time since 2016, when he was named superior of the Jesuit community.

He possesses a master’s degree in counseling psychology in addition to a Master of Divinity, Master of Theology and Licentiate of Sacred Theology.

Father Pham’s Reflection on 25 Years as a Jesuit:

This year marks my jubilee, 25 years, since becoming a Jesuit.  The years have gone by quickly and amazingly!

It is often said that it takes a village to raise a child. I would say it takes the whole province to raise a Jesuit!

After 25 years of living in the Society, I have been raised and guided lovingly by an uncountable number of people.  They love me so much, pray for me always and support me in many ways.  I heard in the old days that once you joined religious life, you really lost your family, or they became secondary in your life.  That did not happen to me.  On the contrary, I have become closer to my family.  I find that not only have I become a Jesuit, but my whole family has as well. I have learned not just to be a person of prayer, but my whole family has learned to be a family of prayer.  Not only do I have to be careful in every manner of speaking and behaving so not to bring shame on my family, but the whole family is also careful to maintain good reputations in support of me.

Leaving my family 25 years ago, I did not lose my family.  I gained a bigger family by entering the Society.  I met so many people with whom I never thought that I would or could be friends.  Suddenly, I had a great network of friends supporting me and leading me in this vocation.  Wherever I go, there is the Society and friends of the Society supporting me.

During formation, I was asked to write letters to benefactors who have been supporting the Society, in particular my formation.  It amazed me that they were truly heroes supporting me spiritually and financially in a humble and hidden way, for I never had a chance to meet them in person.  They gave me great support.  Without their support, I don’t think that I would have had as good of an education and formation as I did.

After being ordained a priest, I stepped into a greater world, the whole church, in sharing and celebrating sacraments with the people of God.  They also are often strangers, but they trust me and share with me their joys, burdens and suffering.  I am very aware of my limitations and always feel inadequate about language, knowledge and life experiences, but God has worked in me amazingly.  Through my listening and sharing, plus the power of the sacraments that I celebrate with people, I find they are being transformed, healed and becoming new persons.  I feel blessed, honored and humbled in serving people.  They really help me to become more human.

Finally and most importantly, I am grateful to God. His abundant love has led and guided me into this life of serving people and the Society.

Today, when I celebrate my twenty-five years of being a Jesuit, I am happy and thankful to God, to my family, the Society, my friends and the people of God for helping me tremendously in the last 25 years.  I believe your love will continue to shower upon me in the next chapter of my life serving God’s people.