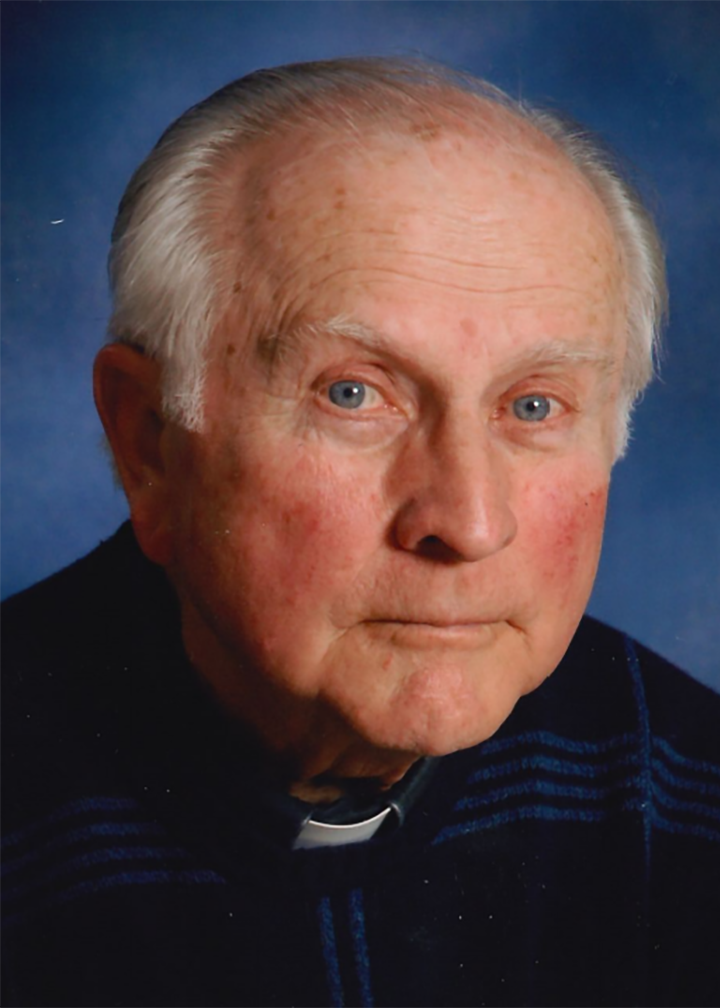 Since 2010, he has served as a pastoral minister, first at the Rockhurst University Jesuit Community (2010-21) and currently at the St. Peter Claver Jesuit Community, both in Kansas City, Mo.

Born in Kansas in 1937, he graduated from Rockhurst University in 1959 with a Bachelor of Science degree. He then served his country in the U.S. Army for two years and was a grade school teacher for a year before discerning that God was calling him to service as a Jesuit.

Father White began his Jesuit ministry at Rockhurst High School in Kansas City, Mo., where he taught art and English from 1972 to 1989.

After a sabbatical, some additional studies and ministering as director of spiritual development for priests in Dodge City, Kansas, Fr. White was assigned to minister to priests in the Archdiocese of Kansas City in Kansas beginning in 1995. He remained in that service for 15 years.

Father White’s Reflection on 60 Years as a Jesuit:

On Sept. 1, 1960, I became US55694911. Army. Drafted. Two-year hitch. On Sunday, Sept. 11, 1960, I was at Mass in the chapel at Fort Leonard Wood, Missouri. Around the time of the consecration, I heard in my head: “Will you be a priest?” I did not need ears to hear that. I immediately said “yes.” Before that, I had no intention of being a priest. I have learned since that that was a “consolation without cause” experience. The consolation was that I knew what the Father preferred; the consolation without cause being that I had not asked to know. It was an invitation, not a command. Ignatius liked that kind of decision making.

Soon I was working in the Archdiocese of Kansas City in Kansas. I did spiritual work and always liturgical work. I have been here for 25 years. I am the only Jesuit living and working in the state of Kansas. This is a good place to practice two of my hobbies: gardening and care of chickens: lots of both.

The Father wanted to place me with his Son. The Holy Spirit keeps giving me homily inspiration – sparks!

The major accomplishment of my 50 years in the priesthood has been to grow in intimacy with Jesus.