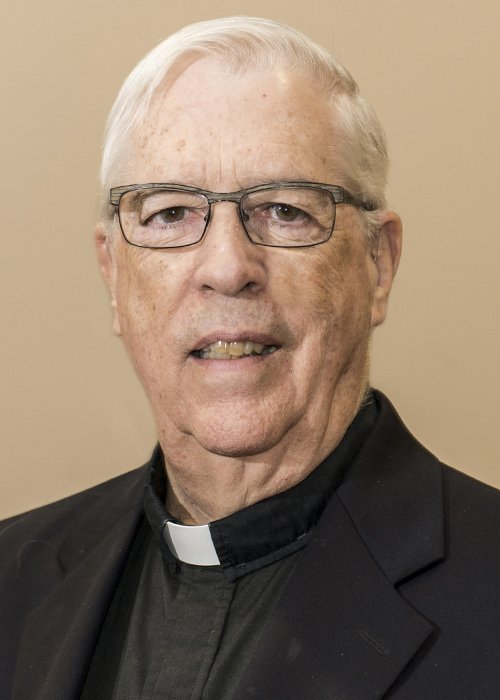 50 Years a Priest
Retreat director at Our Lady of the Oaks Retreat House in Grand Coteau, La.

Born in Chicago in 1940, his family moved to Denver when he was 10 years old.

After graduating from Regis Jesuit High School in 1958, he entered the Jesuit novitiate that fall.

His formation process took him to the West Coast, where he studied at Gonzaga University and Mt. St. Michael’s. He also earned a master’s degree from McGill University in Montreal.

Following his priestly ordination, he was assigned to St. Louis University High School. In total, he served the SLUH community for 20 years, teaching French, Latin and religion and serving as rector.

Father McCabe also spent two non-consecutive periods in administrative service for the former Missouri Province, first as socius from 1991-97 and again as an assistant for vocations and planning from 2007-2012.

Between these assignments, he served as faculty chaplain at Regis Jesuit High School in Aurora, Colo., and as director and superior of Sacred Heart Retreat House in Sedalia, Colo.

He served a four-year assignment as pastor of St. Peter Claver Parish in Punta Gorda, Belize, from 2012 to 2016. Since then, he has been a retreat director at Our Lady of the Oaks Retreat House in Grand Coteau, La.

Fr. Lou McCabe’s Reflection on 50 Years as a Priest

Father Pedro Arrupe – Superior General of the Society of Jesus and now Servant of God, as his cause for canonization has been officially opened – was a great inspiration for many Jesuits, including me. With a gentle spirit, a winning smile and serene confidence, he led us through all the changes brought about by Vatican Council II and modern cultures. A powerful stroke felled him in 1981 so that he had to resign the office of Superior General. In his farewell speech to the 32nd General Congregation he revealed his deep spirituality. I put his immortal words into a calligraphy poster and have prayed his prayer ever since.

More than ever I now find myself in the hands of God.
This is what I have wanted all my life, from my youth.
And this is still the one thing I want.
But now there is a difference;
the initiative is entirely with God.
It is indeed a profound spiritual experience to know and feel myself so totally in His Hands.