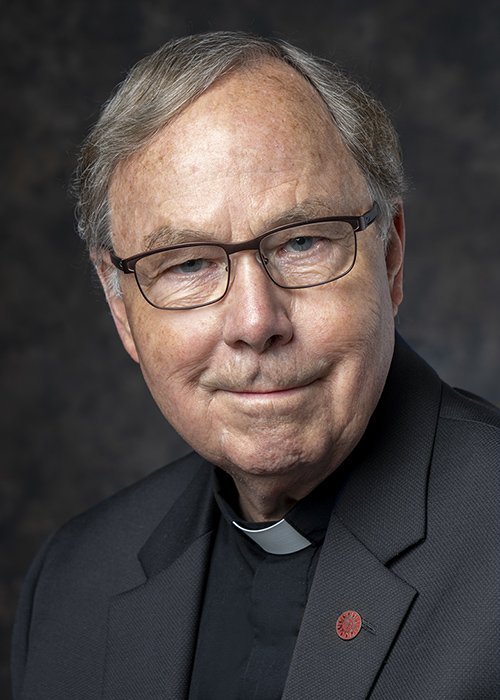 Biography Father Michael Harter, SJ, has been a Jesuit for 60 years. Born in Wichita, Kansas, in 1943, he entered the Society of Jesus at the age of 18. As part of his formation process, he received two degrees from Saint Louis University: a bachelor’s in philosophy and master’s in English. He also received a Master of Divinity from Regis College in Toronto. Among his first ministry assignments was socius (assistant) to the master of novices. Next, Fr. Harter was a staff member, confessor and superior at Ministry Training Services in Denver. Father Harter served in a variety of communications-related ministries, including director of publications for the former Missouri Province, managing editor of America magazine and at Studio J Communications/Review for Religious, productions of the former Missouri Province. From 1994-2003, Fr. Harter was novice director at the Jesuit novitiate in St. Paul, Minn., and then served the Missouri Province as socius (assistant) to the provincial; assistant for communications until 2010. After a brief return to the Review for Religious, he served in Jesuit formation for many years, as assistant USA tertianship director and as provincial assistant for formation for the USA Central and Southern Province. Most recently, Fr. Harter joined the team at the Slavery, History, Memory and Reconciliation (SHMR) project, where he has worked since 2019 as an image digitization assistant. Read Fr. Harter’s homily from the Oct. 24, 2021, Jubilee Mass. Fr. Michael Harter’s Reflection on 60 Years of Availability As a high school student in Kansas, I was introduced to the Society of Jesus. It was the best gift I ever received. I was fascinated by my teachers and thought teaching high school as a Jesuit could be right for me. But God seemed to have broader ideas. Being open to other people’s ideas—primarily a dozen or so provincials and God—has broadened my world beyond the boundaries of Kansas. Kansas was just the starting point! As a Jesuit I have ministered as an editor, formator, retreat director, administrator. My overgrown hobby of photography has even been an integral aspect of each of those ministries. I have accompanied young men testing their call to become Jesuits and worked with others struggling with their wounds and other limitations. Each assignment I have received has been an opportunity to meet and learn from new people and cultures, to make a contribution, and to learn again and again to let go and move on to new places and opportunities.  My theology studies took me to Canada and tertianship to Australia followed by a return visit for a consulting gig ten years later. An unplanned “pilgrimage” through South Asia and sabbatical time in Africa where I did parish ministry and helped with formation of novices were spectacular and challenging bonuses.  Each assignment has been a “through-point”—when past experiences provided starting points for subsequent assignments, vantage points from which I could learn from people’s desires and dreams . . . and refine my own. Now I find myself working in our archives learning how the past impacts the present and allows us to navigate the future. My journey as a Jesuit has taken me through a world filled with contours and colors that others often see only as flat or bland. I continue to grow in gratitude as God and provincials persist in pointing me in fresh directions. – Fr. Michael Harter, SJ