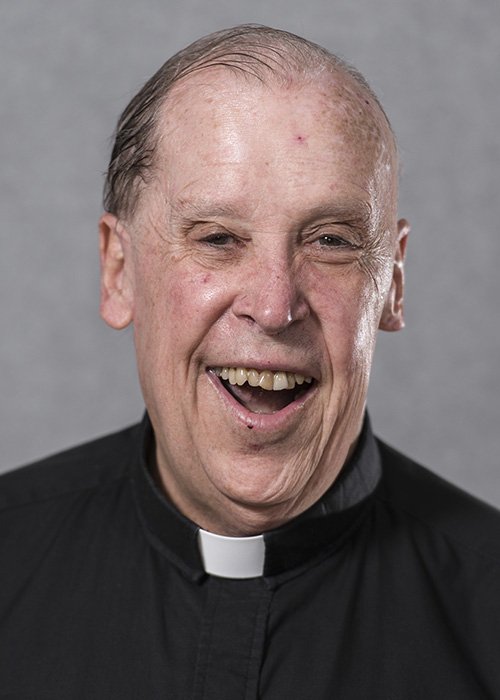 Father Michael Tueth, SJ, has spent most of this ministry employing his natural talents as an educator and writer. This year marks his 50th anniversary as a Jesuit priest.

Father Tueth taught English and/or philosophy at Saint Louis University, Regis University and Santa Clara University before an assignment as executive director of the Sacred Heart Program in St. Louis. He then spent the next 20 years teaching communications and media at Fordham University, where he remained until 2015.

He also holds a Ph.D. in American Civilization, which he completed in 1977 at New York University.

Since 2015, he has been a pastoral minister and writer in the Jesuit Hall Community at Saint Louis University.

I was born and raised in south St. Louis. My family was the only Irish family in my German neighborhood, but we got along with all the neighbors, even during a World War! I was a happy and outgoing boy. I attended Our Lady of Sorrows grade school but ended up going to four different grade schools – long story! For high school. I went to Chaminade College Prep and enjoyed it.

After finishing high school, I entered the Jesuit order because I really admired my Jesuit uncle, Fr. Francis J. O’Reilly. This was a good choice, and I have enjoyed it very much. It has been an honor to live with such intelligent, good-humored and very active brothers and priests.

In my career, as you can tell, I taught at four Jesuit universities and a couple of other colleges. After getting my Ph.D. in American Civilization, I spent most of my time teaching English and communication, ministering to some excellent college students and presiding at more than 200 weddings. You can find the rest of my career on the included list. Finally, at the age of 75, I retired and returned to my hometown.

Over those many years, I have enjoyed appearing in many plays. I became a critic of film, theatre and television.

In my retirement, I have spent a good amount of time reading, offering Mass for many parishes and the Sisters of St. Joseph of Carondelet and going to movies. The coronavirus pandemic has, of course, limited my activities, especially spending time with my niece and nephews and their families.

I am having several medical issues, but it’s wonderful to be taken care of by excellent doctors, nurses and friends. I am basically in good health, however, and hope to enjoy several more years as a child of God, serving people inn need and enjoying my retirement.