A former principal, president and rector of De Smet Jesuit High School in St. Louis, he will be remembered in a Mass of Christian Burial at 7:15 p.m. on Nov. 23, 2020, at St. Francis Xavier College Church, St. Louis. A livestream will be available on the St. Francis Xavier YouTube Channel. There will be no visitation. Burial will be at Calvary Cemetery in St. Louis on Tuesday, Nov. 24 at 9:00 a.m.

John Arnold was born in St. Louis on May 26, 1940 to Harold D. and Mary Louise Leonard Arnold. He is survived by his brothers, William Arnold and Mark Arnold, as well as his brothers in the Society of Jesus.

A St. Louisan to his core, Fr. Arnold attended St. Thomas Aquinas and Holy Family Grade Schools and then St. Louis University High School, where he graduated in 1958. He attended Saint Louis University for two years and then entered the Society of Jesus (the Jesuits) at St. Stanislaus Seminary in Florissant, Mo., on Sept. 1, 1960. He pronounced first vows two years later. He was ordained to the priesthood on May 11, 1973, in the St. Louis Cathedral. He pronounced his final vows on Dec. 8, 1981 at De Smet Jesuit High.

He began his long association with De Smet Jesuit in 1967, teaching English and then serving as assistant principal. After completing his theology studies, he returned to De Smet as a priest and served as principal from 1974-77. He was then moved to Fusz Memorial, where he was a floor superior for Jesuit scholastics and also taught religion at St. Louis University High School for a year.

After earning an MBA at the University of Chicago in 1980, he returned to St Louis to serve as assistant treasurer and revisor for apostolates in the former Missouri Province Offices. In 1988, he was appointed province treasurer.

In 1992, he returned to De Smet Jesuit as rector and teacher of mathematics. He was named president of the school in 1998 and served in that role until 2006.

Failing eyesight made necessary his retirement and move to Jesuit Hall in May 2018.

A victory in a charity poker tournament 33 years ago was the seed that sprouted the legend of Fr. John Arnold as a formidable poker player. He continued playing until this year’s pandemic made poker games unsafe.  Despite his cringe-worthy corny jokes, he was always a cheerful companion until the very end. He will be missed by his family, his brother Jesuits, and all the many people whose lives he touched.

In addition to his MBA from Loyola University Chicago, Fr. Arnold earned a bachelor’s degree in humanities, a Master of Arts in educational administration, and a Master of Divinity from Saint Louis University.

We remember with gratitude all that God has done through Fr. Arnold’s life of service to God and God’s people. 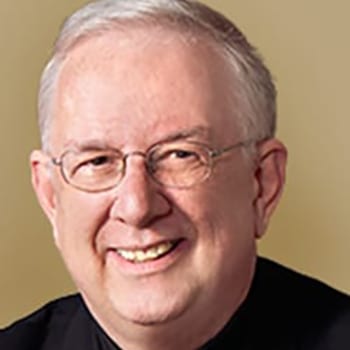