A Mass of the Resurrection will be celebrated on Wednesday, April 14, at 10:00 a.m. (MDT), at St. Ignatius Loyola Church in Denver. Attendance is limited to 50 people. Burial will follow at Mt. Olivet Cemetery in Wheat Ridge.

He was born in Pueblo, Colo., on Feb. 2, 1936, to Edward D. and Anna Kovacic Arthur. In addition to his parents, he was preceded in death by sister Irma Jane (Mrs. J.H.) Dent. His sister Frances (Mrs. F.A.) Vaughn died just days after he did, on March 28. He is survived by 15 nieces and nephews and numerous great-nieces and -nephews.

His teaching ministry began in 1961, with one year at St. Louis University High School and one year (1962-63) at Regis High in Denver. He began his university ministry when he was missioned to teach business administration at Rockhurst College (now University) in Kansas City, Mo., during the 1968-69 school year.

He took time away from the classroom to earn an MBA at Indiana University, and returned to Rockhurst College in 1973, where he taught economics and management until 1999, always encouraging his students to “think outside the box and dream big.” He began a new career with the new millennium, moving to the Sacred Heart Jesuit Retreat House in Sedalia, Colo., to preach retreats and do spiritual ministry. He remained until 2017, when he moved to the Xavier Jesuit Center in Denver to continue his spiritual ministry.

Father Arthur was well read and enjoyed analyzing and discussing the events of the day, occasionally finding pleasure in being a contrarian. His homilies were thoughtful and thought-provoking. He could often be found sitting on the little patio outside his room at Xavier Jesuit Center in prayer or reflection.

In addition to his MBA, he also earned a doctorate in business administration from Indiana University. He also completed several degrees at Saint Louis University: a bachelor’s degree and a licentiate in philosophy, a licentiate in sacred theology and a Master of Arts in economics.

We remember with gratitude all that God has done through Fr. Arthur’s life of service to God and God’s people. 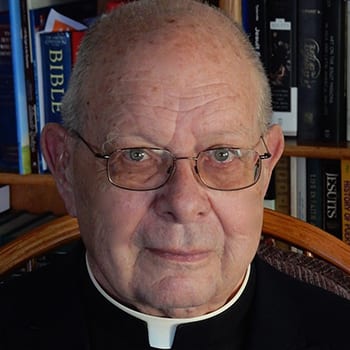