Father Brou is remembered as a kind, generous, prayerful and spiritual man who had an adventurous streak in him. Even as an elder, he was ready for a new experience or a change of pace when many persons younger than he would have been happy with their years-long routine.

Father Brou was born on Nov. 3, 1928, in Edgard, La. He is predeceased by his father, Amedee L. Brou, his mother, Olga Burch Brou, and his brothers Amedee and Joseph. He is survived by his brother Charles, nine nieces and nephews, and many grand-nieces, grand-nephews and cousins, as well as his brothers in the Society of Jesus.

Father Brou was chosen for the Ceylon Missions in what is now Sri Lanka and departed in August 1954 for St. Michael’s College in Batticaloa, where he taught for two years. In 1956, he was transferred to St. Gabriel’s College in Yatiyantota for a third year of teaching as well as for study of the Sinhalese language. In 1957 he left Ceylon to study theology in Kurseong, Darjeeling, India, at St. Mary’s Theological College. After one year, he returned to the United States and was missioned to Dallas for another year of a ministerial assignment, this time at Jesuit High School. In 1959 he reported to St. Marys, Kansas,to finish his theology studies.

Following his priestly ordination, Fr. Brou was assigned back to Jesuit Dallas for a year of teaching, 1962-63.

Next came an assignment to Jesuit High School in Tampa, where he remained until 1970 before returning a third time to Jesuit Dallas from 1970-72.

At this point in his life,  Fr. Brou left high school work and took up the more direct spiritual ministry which would occupy him for 50 years. For one year, Fr. Brou worked at St. Rita’s Church next to the high school in Dallas as associate pastor, but then he requested to be sent again to the Missions, specifically to Africa. In his request to the provincial, he wrote that he felt the need “to make up for all the injustices that white America has heaped upon our black brothers and sisters, to atone by leaving my ‘own white America’ to work in a land where the vast majority of its citizenry are black.”

His request was granted, and Fr. Brou was sent to Rhodesia (now Zimbabwe) to St. Albert’s Mission, where he was appointed principal of the secondary school. He did this work for two years and then spent the next year as a retreat director at the Dominican House of Prayer in Durban, South Africa.

From 1992 to 2001 Fr. Brou worked in Baton Rouge, La., as a campus minister at the Catholic Student Center of Southern University, a historically Black university. He also served as a province consultor from 1994 to 2000.

He returned to the Spirituality Center in Grand Coteau to direct retreats from 2001 to 2006.

In 2006, at 77 years of age, he accepted an appointment as rector of Jesuit High School in Tampa, an office he held until 2009. He then continued in Tampa as school chaplain until 2015.

When health issues arose, Fr. Brou asked to be sent to Manresa, and he was there for the second half of 2015, but went in January 2016 to the St. Alphonsus Rodriguez Pavilion in Grand Coteau to pray for the Church and the Society.

Finding that he had more energy than he had thought, and that maybe he wasn’t quite ready for the life of the Pavilion, he allowed himself to be “rescued” by Fr. Richard Hermes, SJ, president of Jesuit High School in Tampa, and was reassigned there in August 2016. He served there for four more years, much beloved, until his health demanded his return to Grand Coteau in July 2020.

A Mass of the Resurrection was held on Friday, October 22, 2021, with Fr. Michael Chesney, SJ, officiating. Burial took place at St. Charles College cemetery immediately after the Mass.

We remember with gratitude all that God has done through Fr. Brou’s life of service to God and God’s people. 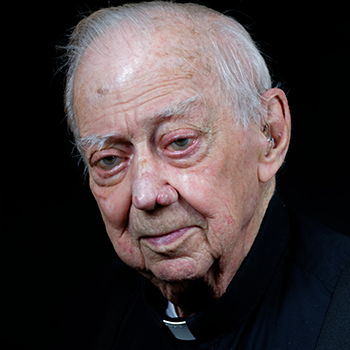