Born in Chickasha, Okahoma, on Aug. 18, 1935, he attended St. Joseph’s Academy in Chickasha and Cascia Hall Prep in Tulsa, Okahoma, graduating in 1953. He earned a B.S. in history at Saint Louis University in 1958 and served in the U.S. Navy (1958-61) before entering the Society at St. Stanislaus Seminary, Florissant, Missouri on Sept. 1, 1961. After first vows, he studied philosophy at Fusz Memorial. His regency was at Kapaun High School in Wichita, Kansas (1966-68). His theology studies were at Saint Louis University (1968-72). He was ordained on June 3, 1971, made tertianship in Wernersville, Pennsylvania and pronounced his final vows on Oct. 13, 1982.

Fr. Burtschi earned an M.A. at Saint Louis University in Speech Communication (1966) and a Ph.D. at Michigan State in Instructional Development (1977). His specialization was in physiological instrumentation and development of instruction using technology. Fr. Burtschi worked for many years on a variable pitch artificial larynx that would allow improved communication over existing products for those who had lost the capacity for speech.

One of his devices was accepted into the Historical Artifact Collection at the Mayo Clinic. His work in this area displayed a lifelong desire to use technology to benefit people, whether it was to relieve suffering or simply to make things more efficient.

He taught at Saint Louis University and Loyola University in Chicago. Fr. Burtschi also spent many years in hospital ministry, where his compassion was much appreciated. Fr. Burtschi himself endured a number of very painful conditions right up to and including his final illness. However, even when he found himself experiencing pain, he desired to keep working, seeing whatever pain he had as part of the cross.

He is preceded in death by his parents, Julius R. Burtschi and Julia Muleady Burtschi. He is survived by his brother Thomas and his sister, Mrs. Judy Maloney. 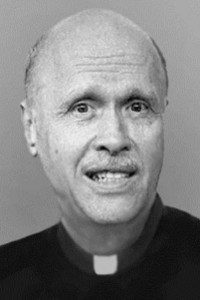