He was born April 14, 1927, in Evanston, Illinois, to Thomas B. Casey and Mary Kathryn Lavin Casey, who preceded him in death. He was also predeceased by brothers Bernard, Edward, Richard, Robert, and John Casey and a sister, Margaret Hindman. He is survived by his brother James and his sister Anne Marie Cody.

He entered the Society of Jesus at St. Stanislaus Seminary in Florissant, Missouri, on February 4, 1945, when he was just 17 years old. He was ordained June 19, 1957 at St. Mary’s College, St. Marys, Kansas. He pronounced his final vows on Aug. 15, 1962 at Regis University in Denver.

Fr. Casey had two main apostolates as a priest. He taught sociology for 15 years at Regis College, now University, in Denver (1960-75), and for briefer times at Seattle University in Seattle and at Saint Louis University. He then transitioned to pastoral ministry, serving in various towns and dioceses where priests were scarce.

The opportunity to live as part in a community was especially appealing to Fr. Casey, and one of the reasons he chose the Jesuits over life as a diocesan priest. So, he surprised no one more than himself when he made himself available to serve in remote locations. He found himself drawn to this ministry by the faith of the people he served, especially in Trinidad and Pueblo, Colorado and Tulsa, Durant, and Wilburton, Oklahoma. It is notable that, on more than one occasion, when he thought he might be at the point of retirement, he answered yet another call to a parish or convent that needed a priest. 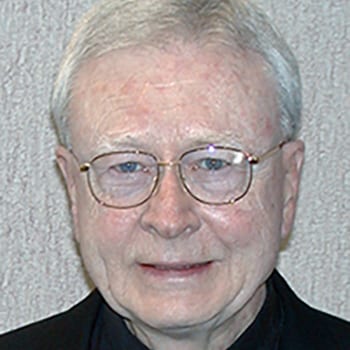