Father Costello donated his body to science. A Memorial Mass will be celebrated at St. Francis Xavier College Church in St. Louis on Wednesday, Nov. 11, at 7:15 p.m. A livestream will be available on the St. Francis Xavier YouTube Channel. There will be no visitation.

Jim Joseph Costello was born in St. Louis on July 9, 1931 to Michael Joseph and Catherine Hughes Costello. In addition to his parents, he was preceded in death by his brother, Thomas Costello. He is survived by his nieces, Jenny and Maureen Costello, nephew, Mike Costello and his brothers in the Society of Jesus.

He attended Saint Louis University for two years before entering the Society of Jesus on Aug. 8, 1953, at St. Stanislaus Seminary in Florissant, Mo., pronouncing First Vows on Aug. 15, 1955. He was ordained to the priesthood at College Church on June 8, 1966. He pronounced his Final Vows on Nov. 6, 1971, at St. John’s College in Belize.

Father Costello served in a variety of ministries, ranging from education to retreat and parish work as well as hospital chaplaincy and campus ministry. From 1960-63, he taught history, Latin, and math at St. John’s College in Belize City, Belize. He returned to serve as principal from 1968-75 and as a teacher from 1976-77.

In 1978, Fr. Costello transitioned to retreat ministry at Sacred Heart Retreat House in Sedalia, Colo., where he remained until 1982. He was assigned as pastor at St. Francis Xavier College Church in 1982 and served until 1988. Two years as chaplain at Cardinal Glennon Hospital in St. Louis and two years as a campus minister at Rockhurst University were followed by a year as minister to priests in the Diocese of Kansas City-St. Joseph and a year at St. John LaLande Parish in Blue Springs, Mo.

He returned to Sacred Heart Retreat House in Sedalia for six years (1994-2000), then spent a year as acting superior and acting pastor of the Trinidad Area Catholic Community (2000-1). Beginning in Oct. 2001, his ministry centered on College Church, where he served as associate pastor and, at times, acting pastor, and Jesuit Hall, from which he was employed in various ministries.

Fr. Costello’s Jesuit brothers remember him for his gentle and joyful spirit and warm smile. He was trusted and beloved by generations of students, parishioners, retreatants and patients. At College Church he was a legend as a confessor for many, many years, known as the kindest, gentlest person one could hope for when going to the sacrament of reconciliation.

Father Costello had a bachelor’s degree in philosophy and a Master’s in education from Saint Louis University. He also earned a Bachelor’s in Sacred Theology from St. Mary’s College in St. Marys, Kansas.

We remember with gratitude all that God has done through Fr. Costello’s life of service to God and God’s people. 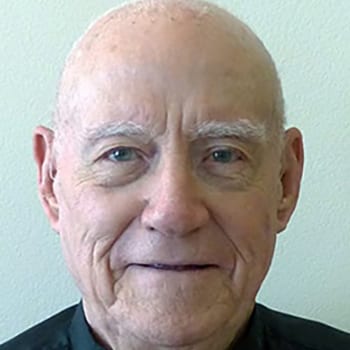