Father Robert R. DeRouen, SJ, died Monday, Sept. 19, in St. Louis. He was 93 years old and just marked 75 years as a Jesuit. He was a priest for 62 years. He donated his body to the Saint Louis University School of Medicine.

Born in Trinidad, Colorado, on December 9, 1922, he was the son of Roy R. and Gertrude Coley DeRouen, both deceased. He is survived by his brother Joseph DeRouen of Tucson and sisters Elida Gibbons of Topeka, Kan. and Adele Benter of Greeley, Colorado.

He began his priestly ministry as a high school teacher, and he spent more than 20 years in the classroom, teaching English, Spanish and religion. He taught at all five stateside high schools of the Jesuits’ former Missouri Province: St. Louis University High, Kapuan High School in Wichita, Kansas; Rockhurst High in Kansas City, Missouri, and De Smet Jesuit High in St. Louis.

After two years as associate pastor at St. Vincent de Paul in Denver (1970-72), he returned to Denver to serve in pastoral ministry, (1972-77) then teaching and directing retreats. From 1977 on much of his ministry was directing retreats while based in Denver, first at the Regis Jesuit Community and then, from 1991-2014, at Xavier Jesuit Center. He has been in prayer ministry in St. Louis since 2014.

The focus of his pastoral ministry was the Spiritual Exercises of St. Ignatius. He spent more than 40 years giving retreats, across the U.S. and beyond. The renowned spiritual teacher and writer Anthony de Mello, SJ, made a deep impression on Fr. DeRouen, helping to shape his own ministry. Those who made his retreats frequently commented on his tremendous enthusiasm and positive approach. On the homemade flyers that he sent out to promote various events, he often wrote “Joy!” and urged that the events afforded an opportunity to “take time to relax, breathe, and meditate.”

He had a teaching style that was unique and engaging. His impact as a teacher can be attested to by the fact that he still received letters of appreciation from former students 45 years after he taught them. 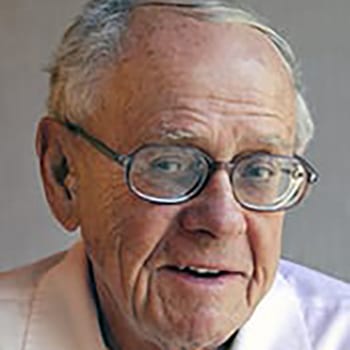