Raymond R. Fitzgerald, SJ, died September 17, 2016, at St. Alphonsus Rodríguez Pavilion in Grand Coteau, La. He was 58 years old, a Jesuit for 36 years and a priest for 25 years. Visitation will be 12:30 p.m., Saturday, September 24, with the funeral Mass at 1:30, both at St. Charles Borromeo Church in Grand Coteau. Burial will be at the Jesuit Cemetery, St. Charles College, Grand Coteau.

Fr. Fitzgerald was in his third year as president of Jesuit High School in New Orleans when he was diagnosed with amyotrophic lateral sclerosis (ALS), better known as Lou Gehrig’s Disease. He stepped down as president in June 2014 and remained for a year as special assistant to the president. He moved in June of 2015 to the St. Alphonsus Rodriguez Pavilion in Grand Coteau.

In facing his diagnosis of ALS, Raymond showed his courage and deep faith, seasoned with his typical sense of humor and accompanied by a total lack of drama. Given his high profile as president of Jesuit High, his sharing of the diagnosis with the students, faculty, staff, and families had a tremendous impact. In speaking of his situation, Raymond constantly returned to the Spiritual Exercises of St. Ignatius Loyola, founder of the Jesuits. He repeated the core truth that humans are created to praise, reverence and serve God; he then added: “That’s why we’re here. Whether we’re healthy or ill doesn’t enter into it.”

Raymond Richard Fitzgerald was born in New Orleans on July 13, 1958, to Raymond R. and Mary Caire Fitzgerald. Survived by his mother and sister Lucy Smedstad, both of Slidell, La., he was preceded in death by his father.

A graduate of Jesuit High School, New Orleans, he attended Loyola University New Orleans, earning a Bachelor of Arts with a double major in Classics and History before entering the Society of Jesus (the Jesuits) on August 14, 1980 at St. Charles College in Grand Coteau. He made his first vows there on August 15, 1982. He was ordained a priest on June 8, 1991, in St. Joseph Chapel on the campus of Spring Hill College in Mobile. He pronounced his final vows on December 8, 1999 in the Chapel of the North American Martyrs at Jesuit High School New Orleans.

He was appointed Socius (or assistant) to the provincial of the former New Orleans Province, serving under two different provincials. He then was chosen in 2011 as president of Jesuit High School in New Orleans; he was also acting rector of the Jesuit High community during his last year as Socius and first year as president (2011-2012).

He continued his spiritual ministry up to his death, and not just his primary mission of praying for the Church and the Society. He also managed to direct retreats privately and maintained extensive contacts via email. In all of these positions, he not only served with distinction, but often provided a model of how the job should be done. His extraordinary memory, organization and efficiency were legendary.

Fr. Fitzgerald was above all an educator. From very early on, he saw secondary education as his calling, and it was in that field, especially at Jesuit College Preparatory in Dallas and Jesuit High School in New Orleans, that he made an impression never to be forgotten. To watch him at work with high school students was to understand why education is counted among the arts. He understood and practiced that Jesuit education which leads the entire person not just to academic success but, ideally, to an encounter with God. In his words: “What’s true of any good teaching is that personal connection, whereby not just the material but the whole process of learning is brought out – led forth – from the student, which is what the word ‘education’ means, by a teacher who knows that student.”

His dry wit and unassuming manner had a special appeal to young students— the bewildered eighth-grader, the timid freshman—and he made a special effort to ease their anxiety and make them feel a part of the whole enterprise. Those relationships inevitably continued beyond graduation and into adulthood. He was continually sought out by former students as well as those led to him by those students. His availability, wisdom and common sense could be taken for granted, no matter what the problem.

In addition to his bachelor of arts, he studied philosophy and earned a Master of Arts in history at Saint Louis University. He earned his M.Div. at Weston School of Theology in Cambridge, Mass. and a Master’s in Education in Religious Education from Boston College. 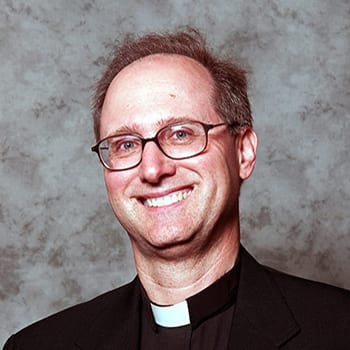