Father Koesterer donated his body to science. There will be a memorial Mass at a later date when public events are again allowed.

He was born in Freeburg, Ill., on May 11, 1929, one of eight children of Albert J. and Katherine E. Koesterer. In addition to his parents, he was preceded in death by brothers Albert, Larry, Hank and Ralph, and by his sisters Cleo Boze and Esther Webb. He is survived by his brother Herman (Maureen) Koesterer, of Belleville, Ill., and a sister-in-law, Julie Koesterer, of Bridgeton, Mo.

Father Koesterer taught German and English at St. Louis University High School for two years, 1959-61. In 1967, he was assigned to teach German and French at De Smet Jesuit, where he remained for nine years. In 1976, he felt called to shift his apostolic work and dedicated the next four years to studying music; he received a master’s degree in piano from Ball State University in 1979.

Father Koesterer earned a Bachelor of Arts in philosophy and a master’s degree in German at Saint Louis University. He studied theology at St. Mary’s College in Kansas.

We remember with gratitude all that God has done through Fr. Koesterer’s life of service to God and God’s people.

Memorial gifts may be made to the USA Central and Southern Province of the Society of Jesus at 4511 West Pine Blvd., St. Louis, MO 63108 or online. 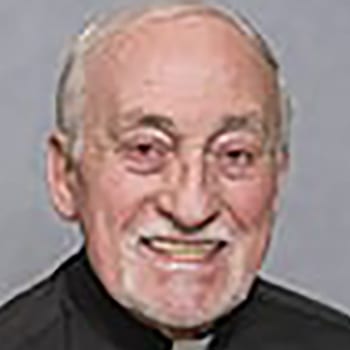