Born in Germany, Brother “Geb” studied pharmacy and mechanics before being drafted into the German Army in 1941. From 1941 to ‘45, he built railroads and bridges as a soldier in the Russian Front to facilitate the German advance, and then destroyed them before the Russians could do a counter-offensive.

After the war, he studied art and graphics and worked at an American officers club where people he met there aided his immigration to the U.S in 1949.

From 1949 to ‘64, he lived and worked in the Miami area doing decorative lighting and setting department store window displays before entering the Society, which he learned about through a Jesuit in Miami. He later said he did not want to be a priest, but saw that being a Jesuit brother provided flexibility in his service to God, and the intellectually stimulating life he sought.

He studied sculpture and applied arts in Vienna and taught for years at Loyola’s Department of Fine Arts where he chaired the Department of Visual Arts in the 1970s.

He taught for a year in Venice in Spring Hill College’s Overseas Program in the late 1980s. He spent a year helping prepare a special edition of the Society of Jesus’s Yearbook for the Ignatian Year 1991.

While at Loyola, he led student tours on art and art history to Europe. He retired from Loyola in January 2014.

Much of his work focused on iconography and he once observed, “You don’t look at an icon. The icon looks at you.”

A cousin in Germany, a godson in France and his fellow Jesuits survive him.

Memorial Masses in his name will be held Jan. 22, 2015 in the chapel at St. Alphonsus Rodriguez Pavilion in Grand Coteau, La., and on Jan. 23 in the chapel of the Loyola New Orleans Jesuit Community residence. 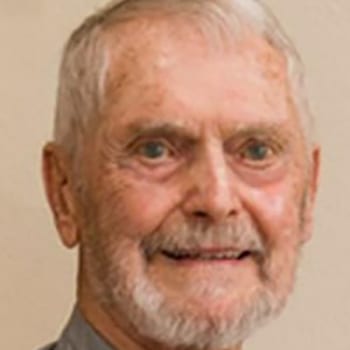