He completed a B.A. in English and a Licentiate in Philosophy at Saint Louis University. After teaching Latin and English at Marquette University High School in Milwaukee from 1941 to 1944, Fr. Guentner studied theology at St. Mary’s College in Kansas, where he was ordained to the priesthood on June 18, 1947.

After tertianship in Decatur, Ill., Fr. Guentner taught Latin for three years at St. Stanislaus Seminary. He was then appointed socius to the master of novices and served in that position from 1952 to 1957. Fr. Guentner was a gifted musician and during his time at the seminary, he directed novices and scholastics in choral and liturgical music.

Fr. Guentner taught Latin, theology and music at Saint Louis University from 1957 to 1967. During that time he completed a master’s degree in music at Washington University in St. Louis. He wrote his thesis on Cistercian Chant. Fr. Guentner also composed choral pieces, including “Is it Far to Bethlehem?” and “Praises to the Lord,” that are still being sung today. He was as a reviewer for Caecilia: A Review of Catholic Church Music.

In 1967 Fr. Guentner became a full-time member of the music department, where he served until his retirement in 1991. He was the chair of the department for several years and also directed the Saint Louis University Chorale. Alumni of the chorale later established a scholarship fund for music majors at Saint Louis University in Fr. Guentner’s honor.

Fr. Guentner always loved traditional hymns and chants. At the same time, he welcomed changes in liturgy and music that grew out of the Second Vatican Council. In the late 1960s, Fr. Guentner presided frequently at non-traditional Sunday Masses in the lower College Church. In addition to his other responsibilities, Fr. Guentner regularly did parish supply in St. Louis and on occasion would cover the Masses at parishes during the summer to give pastors a chance to take a vacation.

After his retirement, Fr. Guentner continued to teach Latin part-time and to edit music. At the age of 77, Fr. Guentner began a 10-year stint as guestmaster at Jesuit Hall. He was well suited to this work, as he was always a friendly and welcoming presence in the community. In 2012, as his health began to decline, Fr. Guentner joined the Pavilion Community where he continued to pray for the church and the Society. Fr. Guentner is survived by his sister, Mrs. Mary Frances Aldrich. 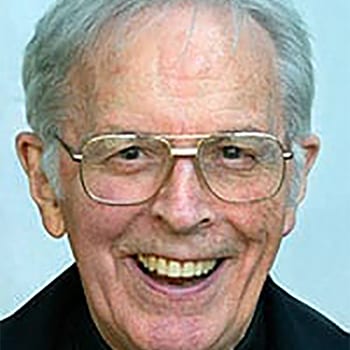