Remembered for his deep devotion to his family, his Jesuit brothers, and his many, many friends, Fr. Guyer’s life will be celebrated with a memorial Mass at St. Francis Xavier (College) Church on Thursday, July 28 at 10:15 a.m. A livestream of the Mass will be available on the parish’s YouTube channel. Burial will take place at Calvary Cemetery on a date to be determined.

Jim Guyer was born in Denver on July 21, 1938, to James W. and Mary Austin Guyer. He is survived by his sisters, Barbara G. Hainley, Mary Linda Reske, Margaret Ann Fuss and Agnes Teresa Austin-Guyer and their families.

He began college at Colorado State in Fort Collins, but he transferred to Regis College (now University), graduating in 1960 with a degree in history, philosophy, and economics. His experience at Regis, a Jesuit college, made a deep impression on him, for he entered the Society of Jesus in Florissant, Mo., on Sept. 1, 1961. He pronounced first vows on Sept. 2, 1963, and was ordained to the priesthood on May 27, 1972, at the same cathedral in Denver where he had been baptized. He professed final vows in the Society of Jesus on Feb. 16, 1992, in Denver at the John Francis Regis Chapel at Regis University.

Father Guyer returned to Regis College in 1979 and soon became a professor of history there, with other assignments over the years: director of academic advising, rector of the Jesuit community, 2002-08, and province consultor, 2005-12. From 2013 to 2018, he was an adjunct professor and a pastoral minister, with one year, 2014-15, as the Jesuits USA Central and Southern Province assistant for higher education. In January 2021, his health necessitated a move to the Jesuit infirmary in St. Louis.

Father Guyer loved being with people, especially if the occasion was a celebration. Although his lifelong love for Colorado made his final move to St. Louis difficult, he eagerly volunteered to be one of the first to move to the new community under construction at Delmar Garden Villas North; he wanted to help set the tone and welcome the rest of the Jesuits.

Father Guyer earned a bachelor’s degree in philosophy and a master’s in modern European history and American history at Saint Louis University. He also did his theology studies at the Saint Louis University School of Divinity. He spent two years, 1972-74, in Kamakura, Japan, studying Japanese language, history and culture, with a special emphasis on Japan’s interaction with Jesuit and Western influences. His studies continued at Columbia University 1974-75 and Colorado University in Boulder 1976-79.

We remember with gratitude all that God has done through Fr. Guyer’s life of service to God and God’s people. 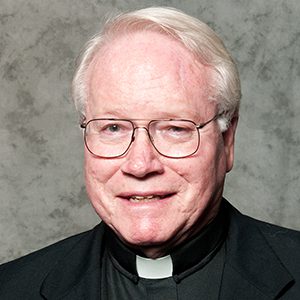