Remembered by his brother Jesuits for his distinguished academic career, his discipline and his impact on Jesuit formation, Fr. Hallett donated his body to science. There will be a Memorial Mass on Wednesday, July 6 at 4:30 p.m. in the 15th floor community chapel at Jesuit Hall in St. Louis. Masks are required.

Garth Hallett was born in Chester, Penn., on Aug. 15, 1927, to George H. Hallett, Jr., and Mary Lie Hallett. In addition to his parents, he was preceded in death by his brother Arne L. Hallett and half-brother Gerald Pond. He is survived by his nephew David Hallett of Manchester, Mo.

Father Hallett grew up in Santa Barbara, Calif., where he was baptized while a student at Santa Barbara Catholic. He served in the U.S. Navy after high school, 1945-46. On Sept. 7, 1946, he entered the Jesuit novitiate at St. Charles College in Grand Coteau, La., where he pronounced first vows on Sept. 8, 1948. He was ordained a priest on Aug. 6, 1959, in Brussels.

Father Hallett taught at Jesuit High School in New Orleans from 1953 to 1956, and taught philosophy at Loyola University in New Orleans, 1961-62. In 1962 he was missioned back to studies, at the Gregorian University in Rome, where he would earn his Ph.D. in philosophy in 1964. While in Rome he pronounced his Final Vows in the Church of the Gesù on Feb. 2, 1964.

Doctorate in hand, Fr. Hallett began a distinguished career as professor, scholar and author. From 1964 to 1970, he taught at Spring Hill College and/or the Jesuit House of Studies on the Spring Hill campus. He was dean of the House of Studies faculty, 1965-68 and the chairman of the Spring Hill College Philosophy Department from 1968 to 1970. From 1970 to 1979, he was an associate professor of philosophy at the Gregorian University, from which he would return to Spring Hill every couple of years to offer an accelerated course in Linguistic Analysis to the philosophy students there.

He was an associate professor at the University of Detroit, 1979-85, a visiting professor at Xavier University in Cincinnati, 1982-83, and then a professor at Saint Louis University 1985-2009. At SLU he was also dean of the College of Philosophy and Letters for much of the time, assisting young Jesuits in their academic program.

He had a year’s sabbatical at Loyola University in Chicago and at Marquette University 2010-11 and one year of teaching at St. John’s College in Belize 2012-13, but for the remainder of those years he was a writer in residence at Jesuit Hall in St. Louis.

Father Hallett had a major influence on the Society of Jesus’ philosophy programs at Spring Hill College, the University of Detroit-Mercy and Saint Louis University. Beginning his teaching career at Spring Hill while Vatican II was still in session, it fell to him to re-shape the Jesuit students’ program to respond to the changes mandated by the Jesuits’ 31st General Congregation. He expanded the study of contemporary philosophers, with an emphasis on close reading of their key texts.

He was known for his organized and logical approach not only to academics, but to everyday life as well. His work, exercise and recreation were always carefully planned and thought out. His personal life was a model of simplicity. He was always an eager participant in Jesuit gatherings, available to his students and brother Jesuits.

In addition to his doctorate, he earned a Bachelor of Arts in history at Spring Hill College in Mobile, Ala., and Licentiate in Sacred Theology at the College St. Albert de Louvain in Belgium.

We remember with gratitude all that God has done through Fr. Hallett’s life of service to God and God’s people. 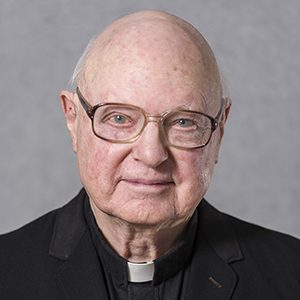