Born in Rio Piedras, Puerto Rico, on Dec. 22, 1929, to H. Carlos and Carmen Seraballs de Lavergne. He was baptized in the historic church of Nuestra Señora del Pilar at Plaza de Río Piedras.

After high school he studied at Xavier University in Cincinnati, Ohio. On Jan. 24, 1951, he entered the Society at Noviciado San Estanislao de Kostka in Havana, Cuba, pronouncing his first vows on Jan. 25, 1953. After Juniorate, he studied philosophy and science at Spring Hill College in Mobile, Ala. (1956-59), and then taught chemistry, science and religion for three years at Colegio San Ignacio de Loyola in San Juan.

From 1966 until 1976, Fr. Lavergne served at the Centro Universitario Católico in Río Piedras, doing campus ministry. From 1976 to 1982, he was pastor of San Ignacio de Loyola Parish in San Juan. As minister of the community of Colegio San Ignacio, Carlos was most attentive to the needs of the community. From 1994 until 2000, he was the treasurer of the Independent Region of Puerto Rico and then assistant to the treasurer.

In 2003, he had a sabbatical in Brazil, where he participated in a theological-spiritual renewal program for Jesuits from Latin America. While in Brazil, he also served among the poor. He spent a year in the Novitiate in Caimito and most recently was an assistant at San Ignacio de Loyola Parish in San Juan.

In all his various assignments, Carlos was known to be a very hard worker, whether that entailed preparing class, keeping accounts, maintaining buildings, attentively listening to students who sought his counsel, or preparing homilies and celebrating the liturgy. He was dedicated and generous in serving his brothers in community and in preaching the Gospel to God´s people.

We remember with gratitude all that God has done through Fr. Lavergne’s life of service to God and God’s people. 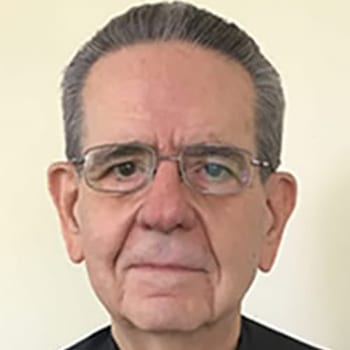