Recalled by his Jesuit brothers as an exceptional administrator, Father Louapre’s funeral will be private. Burial will be in the St. Charles College Jesuit cemetery in Grand Coteau, La.

Albert Louapre was born on Aug. 18, 1930, in New Orleans. He was preceded in death by his parents, Albert C. and Catherine Hocke Louapre, by his sister, Sister Loyola, DC, and by his brother, Merlin E. Louapre. He is survived by several nieces and nephews and by extended family.

A graduate of Jesuit High School New Orleans, he entered the Jesuit novitiate at St. Charles College in Grand Coteau on July 30, 1947, and pronounced first vows there on July 31, 1949. He was ordained to the priesthood June 15, 1960, at St. Joseph’s Chapel on the campus of Spring Hill College in Mobile, Ala. He pronounced final vows at Grand Coteau on Aug. 15, 1976.

Father Louapre’s first teaching experience was at his alma mater in New Orleans, from 1954 to 1957, when he taught math, English, Latin and speech. His first assignment as a priest was at Jesuit College Prep in Dallas, 1961-62.

In 1963, Fr. Louapre was named the principal of Jesuit College Prep in Dallas. He was principal in Dallas for seven years, his longest assignment as principal, and he did much to modernize the school and establish it as a true college preparatory.

In 1970, he was sent to Jesuit High School in New Orleans, where he taught math and later became the academic assistant principal 1971-74. After a year as principal of the University of Detroit High School, he returned to New Orleans to become the province socius (assistant and consultant to the provincial) and director of secondary education, 1975-78. He spent one year as principal at Strake Jesuit College Prep in Houston 1978-79, and then one year back in Dallas as a math teacher.

In 1980, he was named the executive secretary for the Jesuit Conference in Washington, D.C., a post he held for five years. He returned to the principal’s office in 1985, this time at Jesuit High School in Tampa, Fla., and from 1986 to 1988 he served as president and principal.

From 1988 to 1992, he was back in the New Orleans provincial’s office as socius, assistant for secondary education and, for part of that time, also the superior of the provincial residence. In 1992, he returned to Strake Jesuit, where he was rector and a student counselor for three years.

In 1995, Fr. Louapre began a new ministry – spiritual direction and retreats. He directed retreats at the Jesuit Spirituality Center in Grand Coteau, 1995-2003, first as a staff member and then as director, 1999-2003. He was at Montserrat Retreat House in Lake Dallas, Texas, in the fall of 2003, and then spent from 2004 to 2012 as a retreat director at Ignatius House in Atlanta.

In June 2012, failing health necessitated a move to the Jesuit infirmary in New Orleans and then to the Alphonsus Rodriguez Pavilion in Grand Coteau. In 2015, he was moved to a nursing home in the nearby town of Arnaudville, because severe back pain required medication and care that were beyond what could be provided at the Pavilion.

Father Louapre’s service always went above and beyond. Very few other Jesuits served in the number of administrative positions and different apostolates that he did. In his two periods in the province office, he served as socius to five different provincials, a record unequaled in the history of the New Orleans Province. He was notable for his organization and attention to the kind of detail that escapes many. He enjoyed Jesuit community.

Father Louapre earned a Bachelor of Science in physics at Spring Hill College, a licentiate in sacred theology at St. Mary’s College in Kansas and a Master’s in secondary education administration at North Texas State University.

We remember with gratitude all that God has done through Fr. Louapre’s life of service to God and God’s people.

Memorial gifts may be made to the USA Central and Southern Province of the Society of Jesus at 4511 West Pine Blvd., St. Louis, MO 63108 or through the province website at www.JesuitsCentralSouthern.org. 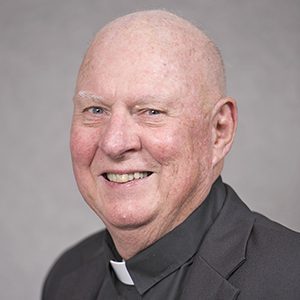