October 1, 2021 — Fr. Gregory F. Lucey, SJ, former president of Spring Hill College, the Jesuit Conference and the Association of Jesuit Colleges and Universities (AJCU), died Sept. 30, 2021, after a brief illness. He was 88 years old, a Jesuit for 70 years and a priest for 57 years.

There will be a Funeral Mass at the Gesu Church in Milwaukee on Friday, October 15, at 10:00 a.m., with a reception following. His remains will then be sent to Mobile for interment at Spring Hill College, as he requested. There will be a memorial Mass in St. Joseph’s Chapel on the campus of Spring Hill on Tuesday, October 12. Visitation will be from 9:30 to 11:00 a.m., with the Mass at 11:00 and a small reception to follow.

“The Jesuits USA Central and Southern Province mourns the passing of Fr. Lucey,” said Fr. Thomas P. Greene, provincial. “He was an outstanding leader of Spring Hill College and staunch advocate for the mission of the Society in higher education. He was also passionate about justice issues and the role of a Jesuit university in serving the faith and promoting justice.”

E. Joseph Lee, PhD, president of Spring Hill College, said, “Fr. Lucey touched so many lives here at Spring Hill College and in our community. While his loss will be felt deeply for some time to come, his love for Christ, the college, and the Mobile community will continue to live on. We see evidence of his stewardship all over campus. As we reflect on his legacy, remember his family and our community in your prayers.”

Other positions Fr. Lucey held throughout his extensive career in Jesuit higher education included rector of the Jesuit community at Marquette University and vice president for development at Seattle University. He also founded and served as director of Marquette’s Center for Ignatian Spirituality and, in 1995, he attended the 34th General Congregation of the Society of Jesus as one of 200 delegates worldwide. He also served as a trustee of Xavier University, Loyola University New Orleans and Marquette University.

“Fr. Lucey gave most of his life’s energy to working in Jesuit education, especially in higher education. Anyone who worked with or knew him saw his wisdom and his care for people and for our schools — most especially Spring Hill. His deep concern came from his indomitable spirit of optimism. What we have learned from him is something we need to be reminded of today: The Lord guides our projects. The difficulties and challenges we experience today can be managed if we rely on him even as we work as if everything depends on our good efforts. This was St. Ignatius’ advice and Fr. Lucey lived it.”

Father Lucey found a second home in Mobile thanks to his tenure at Spring Hill, but he was a Midwesterner through and through. He was born in Ferryville, Wisc., on Jan. 21, 1933, and raised in a large Irish Catholic family, where faith and public service were pillars for him and his siblings, including his brother, former Wisconsin Governor Patrick Lucey.

While most known for his work in Jesuit higher education, Fr. Lucey began his career at his alma mater, Campion High School in Prairie du Chien, Wisc., where he taught before becoming principal, then president, serving 10 years in all.
Father Lucey entered the Society of Jesus in 1951 and was ordained in 1964. He was a masterful storyteller, appreciated a good sense of humor and could be heard a mile away by his deep hearty laugh.

Father Lucey was preceded in death by his parents, Gregory and Ella McNamara Lucey, his brothers, Patrick and Fr. J. Roger Lucey, SJ, and by his sisters, Verona Dyer, Eleanor Watson, and Sister Mary Eleanor, O.P. He is survived by his sister, Kathleen Keegan. 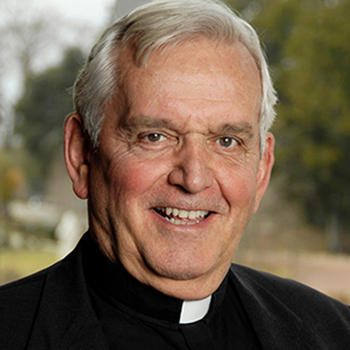