Remembered as a kind and very holy man, Fr. Madden’s life was celebrated in a Mass of Christian Burial on Monday, June 21, 2021, in the Church of St. Charles Borromeo in Grand Coteau. Interment followed in the St. Charles College cemetery.

Tom Madden was born in Providence, R.I., on Dec. 1, 1926, to Thomas J. Madden and Jane Walsh Madden. His parents and two sisters, Mary J. Madden and Roberta Ann McVay, preceded him in death. He is survived by his brothers in the Society of Jesus.

Father Madden’s ministry can be divided into three kinds of service: education, pastoral ministry and retreat work. He began in a classroom at Jesuit High School in 1952. Following ordination and additional religious studies in Spain, he taught at Spring Hill College, where he also served as academic dean, 1966-69. Beginning in 1973, Fr. Madden taught at Xavier University in New Orleans, the only Catholic historically Black university in the U.S. He soon began to teach also at Loyola University’s City College, in the evening division. From 1975-78 Fr. Madden was also the rector of the Jesuit High School community in New Orleans. He taught full-time at Loyola 1978-79 and from 1979 to 1986 he was dean of campus ministry.

In 1986, he was missioned to the Jesuit Spirituality Center at Grand Coteau. He was soon appointed director of the center and rector of the St. Charles College Community. In 1993, he was appointed pastor and superior at the Gesu Church in Miami, his old parish, where he oversaw renovations to the church. In 2002, he returned to the Spirituality Center as a retreat director, but from 2003 to 2005, he served as pastor at St. Charles Borromeo Church, also in Grand Coteau. In 2005, he returned to directing retreats, which he continued to do until failing health necessitated his transfer from active ministry to Alphonsus Rodriguez Pavilion, the community in Grand Coteau for elderly or infirm Jesuits.

Father Madden was cherished as a retreat director and always in demand. His homilies at Mass were carefully prepared, skillfully delivered and spiritually nourishing. There is no question that he led many souls to God.

Father Madden earned a bachelor’s degree in Romance Languages at Spring Hill College and a Master’s in Spanish from Fordham University. He earned an S.T.L. in theology at St. Mary’s College in St. Marys, Kansas, and a Ph.D. in systematic theology from the University of Notre Dame.

We remember with gratitude all that God has done through Fr. Madden’s life of service to God and God’s people. 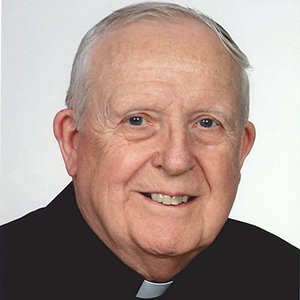