Father Antonio “T.J.” Martinez, SJ, was called to eternal life on November 28, 2014. He died at Houston Hospice from the effects of recently diagnosed stomach cancer. He was 44 years old, a Jesuit for 18 years and a priest for 7 years.

Born in San Antonio, Texas, May 10, 1970, he attended St. Mary’s Grammar School and St. Joseph Academy in Brownsville, Texas. He graduated from Boston College with a B.A. in Political Science and Communications before attending law school at the University of Texas at Austin where he earned a J.D.

Fr. Martinez entered the Society of Jesus in Grand Coteau, La., August 14, 1996. After taking vows, he earned an M.A. in Philosophy at Loyola University in Chicago (2002). He taught theology and was Director of the Community Service Program at Jesuit College Preparatory in Dallas (2002-2004), before studying theology at Weston Jesuit School of Theology in Cambridge, Mass. (2004-2007) earning a Master of Divinity and a Master of Theology. He was ordained on June 9, 2007. After ordination, he earned the M.Ed. in School Leadership at Harvard University in 2008, where he was valedictorian and convocation speaker at the 2008 exercises of the Harvard Graduate School in Education, receiving the Intellectual Contribution/Faculty Tribute Award given by the School Leadership Program.

When the Jesuits opened Cristo Rey Jesuit College Preparatory of Houston, Fr. Martinez was appointed in 2008 as its founding president. Although this was an unusual first assignment for a newly ordained Jesuit priest, he plunged into the work with remarkable energy and enthusiasm. The extraordinary result is one of the success stories of the Cristo Rey school model, and has been documented extensively in local and national news stories.

In 2013, Fr. Martinez took a brief leave from the school to complete the final stage of his Jesuit formation in Nairobi, Kenya. Shortly after returning to Houston, Fr. Martinez was diagnosed in March 2014 with stage 4 stomach cancer. Due to the advanced stage of the disease and in order to pursue treatment options, he stepped down as President at Cristo Rey Jesuit. Treatment did not slow the advance of the cancer. Fr. Martinez received this news with courage and faith, seeing this as yet another “mission” that he wanted to complete as well as he could in the time left to him.

He is survived by his mother and stepfather, Carol and Jack Berryman, his father and stepmother, Tony and Carla Martinez, his sister, Melissa Martinez and brothers Trey and Andy Martinez.

A Mass of Resurrection was celebrated at the Co-Cathedral of the Sacred Heart in Houston by the Most Reverend Joseph A. Fiorenza, Archbishop Emeritus. Bishop Daniel Flores celebrated a memorial Mass in Fr. Martinez’s hometown of Brownsville, Texas. on December 4, 2014. 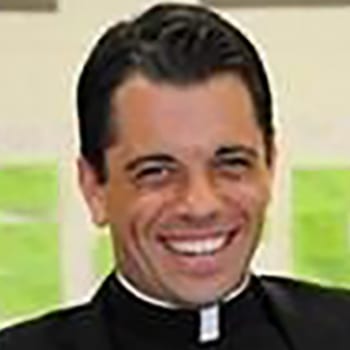