He will be remembered in a Mass of Christian Burial on Saturday, Dec. 11 at 10:30 a.m. in the Loyola Room of Jesuit Hall in St. Louis. A visitation will be immediately beforehand in the same location, beginning at 10:00 a.m. Interment will follow at Calvary Cemetery. The Mass will be streamed live on YouTube. Search for “Fr. William Miller Funeral Mass.”

William Miller was born in Belleville, Ill., on Feb. 8, 1925, to Bernard and Lydia Karr Miller. In addition to his parents, he was preceded in death by his brother Thomas Miller and his sister Julie Dick. He is survived by his nieces, Barb Calhoun and Midge Miller, and his brothers in the Society of Jesus.

He entered the Jesuit novitiate at St. Stanislaus Seminary in Florissant on September 1, 1942. He pronounced first vows on Sept. 8, 1944 and was ordained to the priesthood at St. Mary’s College in St. Marys, Kansas, on June 16, 1955. He pronounced final vows on Feb. 2, 1960, at Sacred Heart Novitiate in Los Gatos, Calif.

Once he completed a doctorate in chemistry 1961, he was assigned to Regis College (now Regis University) in Denver, where he taught until 1967. He then went to the University of California, Los Angeles, for two years of post-doctoral work. In 1969, he went back to Regis in Denver, where he remained until 1999, taking periodic sabbaticals at Sogang University in Seoul, South Korea (1978-79, 85-86, 91-92, and 97-98) as a visiting professor of chemistry.

Hanging up his chemistry professor’s lab coat in 1999, Fr. Miller began serving in a pastoral capacity around the Archdiocese of Denver. In 2012, he made a list of all the parishes in Denver and the surrounding area at which he had helped with Masses and the Sacraments; it came to 41 parishes.

Health concerns ultimately necessitated his move to the infirmary at Jesuit Hall in 2015, just as he was nearing 90 years of age.

That final assignment took Fr. Miller just across the river from where he had spent his childhood, but the intervening 45 years in Colorado engendered a love that he never quite got over.

We remember with gratitude all that God has done through Fr. Miller’s life of service to God and God’s people. 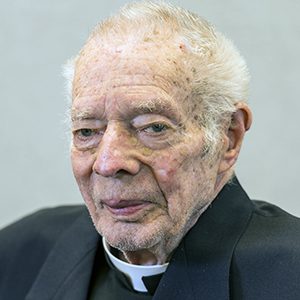