He was born on May 20, 1928, in Sand Springs, Okla., to John A. and Letitia McGinnis O’Connell. In addition to his parents, he was preceded in by his brother, John, and his sisters Julia Green, Virginia Sabin, and Sr. Letitia O’Connell, IHM. He is survived by several nieces, nephews and cousins.

He attended parochial schools in Dallas and St. Louis before attending St. Louis University High School, from which he graduated in 1945. He entered the Society of Jesus at St. Stanislaus Seminary in Florissant, Mo., on Aug. 8, 1945 and pronounced his First Vows on Aug. 15, 1947. He was ordained to the priesthood on June 18, 1958 at St. Mary’s College in St. Marys, Kansas.

He spent many years in study, earning a bachelor’s degree in Greek, a licentiate in philosophy, and a Master’s degree in psychology from Saint Louis University. After this were two years of regency at Campion High School in Prairie du Chien, Wisc., where he taught Latin and Elocution. He studied theology at St. Mary’s College in St. Marys, Kansas, earning a licentiate in sacred theology. He earned a doctorate in experimental psychology from the University of Illinois at Champaign in 1963, followed by a post-doctoral year at Harvard. He had a second post-doctoral fellowship at the University of Kansas in Lawrence.

His funeral Mass was at St. Francis Xavier College Church on Dec. 28, 2020, and he was buried at Calvary Cemetery the following day. 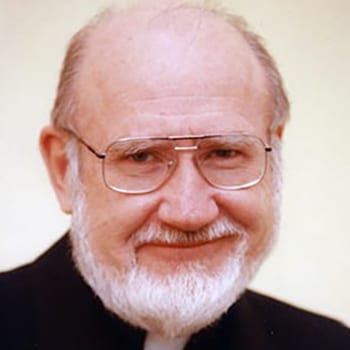