Remembered by his Jesuit brothers as occasionally acerbic, but also gentle, wise and compassionate, he will be remembered in a Mass of Christian Burial at St. Francis Xavier College Church in St. Louis on Monday, Nov. 29, 2021, at 10:30 a.m. The visitation will be at the church immediately before the funeral, beginning at 9:30 a.m. A Memorial Mass will also be celebrated at St. Thomas the Apostle Church, Peoria Heights, Ill., at 5:30 p.m. on Tuesday, Nov. 30.

Paul Stark was born on Aug. 4, 1947, in Kansas City, Kansas. Paul was preceded in death by his father, Paul Stark, Sr. He is survived by his mother, Shirlee Ann Stark, and two brothers, Terrence and David Stark.

Father Stark converted to Roman Catholicism in 1970 at the age of 23. Following his graduation from Kansas University with a Bachelor of Science in Education/Language Arts, he taught at a public school in Kansas City, Kansas and worked in various programs for children with disabilities or behavioral problems, and for a year at Rockhurst High School, a Jesuit high school in Kansas City, Mo.

Father Stark’s ministry was mainly in education. He taught at St. Louis University High, Rockhurst High (1987-93) and Regis Jesuit High in Aurora, Colo. However, most of his education work was in higher education. After serving for a year in Rome at the Pontifical Gregorian University (1993-94), he began work at Saint Louis University as campus minister, assistant to the president and vice-president for student development. He also served in several administrative roles at Wheeling Jesuit University in Wheeling, W.V., including director of mission identity, associate dean of student development and director of campus ministry.

He returned to Saint Louis University in 2008 to work in the Office of Advancement/Alumni Relations and then was vice-president for mission and ministry (2011-2015).

After a year’s sabbatical, he became parochial vicar at St. Thomas the Apostle Catholic Church in Peoria, Ill., a position he held until ill health dictated his move to the Fusz Pavilion at Jesuit Hall in St. Louis in October 2021.

Father Stark’s dedication to the Society of Jesus’ apostolates of education was a great gift. His Jesuit brothers and others who laid their burdens at his feet found in him a strong advocate and a gentle, wise and compassionate listener.

After so many years of devoted service in the stressful world of educational administration, his last assignment as parish priest allowed his priestly gifts to shine, and he leaves behind many admiring parishioners and friends.

Father Stark’s theology studies were at Regis College in Toronto, Ontario, where he earned a Master’s of Divinity degree in 1985

We remember with gratitude all that God has done through Fr. Stark’s life of service to God and God’s people. 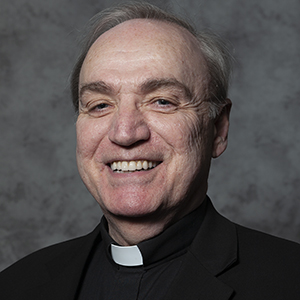