A Missouri Jesuit who transferred to the Japan Province in 1967 has died in the country where he worked for 40 years.

Fr. Keith Ulrich, 81, died of pneumonia Nov. 6, 2013, at Loyola House in Tokyo. Ulrich was born on July 23, 1932, in Jackson, Mich., and entered the Society of Jesus in 1950 at Florissant, Mo., where he completed novitiate and studied humanities. He studied philosophy in St. Louis for three years before moving to Japan in June 1957.

After two years of Japanese language study Ulrich went to Hiroshima Gakuin (a secondary school) for regency (1959-61). Next he went to Tokyo for theology (1961-65) and just before his ordination he had to bear the shock of his mother’s death. He was ordained by Cardinal Doi on March 18, 1964, and would have celebrated his golden jubilee in the priesthood next year.

In 1967, 10 years after arriving in Japan, he relinquished his Missouri Province membership and became a member of the Japan Province.

“We were honored to have Fr. Ulrich missioned to Japan from the Missouri Province,” Fr. Robert Chiesa, secretary to Japan’s provincial, said. “Please accept our gratitude and condolences.”

As was common in those days, Ulrich did tertianship immediately after theology in Nagatsuka (Hiroshima) and then began 17 years as English teacher in Hiroshima Gakuin (1966-1983). There he pronounced his final vows on Sept. 8, 1967, and later served three years as Minister of the Furue (Hiroshima Gakuin) Community. He was the first prefect of the newly erected dormitory for students from outlying areas. Always with an eye out for interior décor and pleasant surroundings, he had a large say about the paint-scheme of the dormitory and had the students help him plant the garden. One summer he recruited students to repaint all the school hallways. After a year’s sabbatical in the U.S. (1979) he returned to Hiroshima to live at the Kôgo Pastoral Center while continuing to teach in the school. His architectural flair was again operative in designing and getting the Kôgo Center built with solid lumber brought from K?be when the old students’ dormitory there was dismantled.

The image Hiroshima graduates cherish of him is that of a very large mustachioed man towering over the students and clad in colorful shirts, ties, and trousers, his stentorian voice echoing into neighboring classrooms. A left-handed writer, he would erase the blackboard with his right hand while simultaneously writing a new sentence with his left. For every class his students had to present some assignment, which he would carefully correct (all 180 of them) and return in the next class. His high-voltage classes exhausted the students but they knew they were being taught by an enthusiastic and masterful teacher.

In 1983 Ulrich moved to Taisei High School in Fukuoka, recently entrusted to the Jesuits. He taught English there and was superior of the Jesuit Community (1983-89) from the time the new residence was being built, about which again he had much to say. He served as chairman of the School Board for three years (1986-89) and then as principal of the school for six years (1990-96), during which time he did all he could to raise its academic standard.

As principal he established a clear and decisive educational policy grounded in Jesuit pedagogical ideals and gained the trust of teachers and staff, many of whom had been employed since Taisei’s pre-Jesuit years. His favorite word was magis, by which he meant never to be satisfied with the status quo but to aim at ever-higher ideals.

When it came time for appointing a new principal, he took a sabbatical year abroad (1996) after which he was invited back to teach part-time at Hiroshima Gakuin (1997-2003). He lived at Kôgo and met with parents and others interested in Christianity. He often spoke about his favorite bible passages: “There is a time for…” from Qoheleth 3 and the parable of the talents in Matthew 25. After retiring from teaching at age 70, he continued to work at Kôgo until he was no longer able to move about freely. After a year and a half in St Louis, he returned to Japan before Christmas of 2007 to reside at Loyola House, with occasional hospitalizations, until his final passing on November 6. 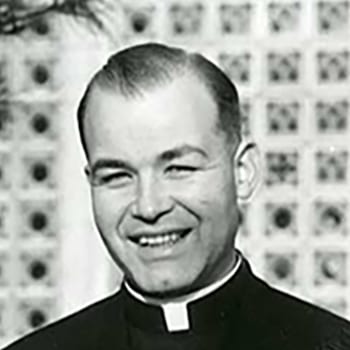