He was born in Buffalo, N.Y., on Oct. 24, 1934, to Albert Vega and Constance LaMendola. In addition to his parents, he was predeceased by his sister Sylvia Tasner. He is survived by his brothers in the Society of Jesus.

Donald Vega entered the Jesuit novitiate of the New York Province at St. Andrew’s on the Hudson in Poughkeepsie, N.Y. He pronounced first vows on Aug. 15, 1955. He was ordained a priest on June 10, 1965, at Canisius College in Buffalo. He pronounced his final vows as a Jesuit on Feb. 2, 1968.

Father Vega was first missioned to Puerto Rico in 1960, when he worked as a professor of history and Christian Social Doctrine at the seminary of San Ildefonso in Aibonito. From 1962-1966, he continued his Jesuit formation in theology studies at Woodstock College in Maryland, where he joined the famous singing group known as “The Woodstock Jesuit Singers.” The group achieved national recognition when they appeared on The Ed Sullivan Christmas program in 1963. During the summers of these years he worked at Georgetown University as a chaplain and as an instructor for the Peace Corps. He also took classes at the School of Foreign Service in Latin American Studies.

In 1967, Fr. Vega returned to Puerto Rico and was named director of the Monserrate Community Center, which supervised special education programs. In 1970 Fr. Vega began working with the Puerto Rican government, which was grappling with the severe social problem of addiction in Puerto Rico. During this period, he worked with the Department of Social Services, the Department of Anti-Addiction Services, was director of Drug Free Programs and director of the Rehabilitation Programs for Addicts and Alcoholics in the Puerto Rican Correctional System. He was also named as special assistant to the Secretary of the Department of Social Services. In recognition of his excellent work and dedication of so many years, Fr. Vega was awarded the prestigious “Manuel A. Pérez Award” in 1980 by then-Governor Carlos Romero. This award is given to persons working in the government in recognition of their outstanding service and invaluable contributions to the people of Puerto Rico.

In 1982, Fr. Vega was named pastor of San Ignacio Parish in Rio Piedras, where he remained until 1989. Upon finishing his term as pastor, he was granted a well-deserved sabbatical for one year, but used his time to continue studying, this time at Harvard Divinity School, where he studied Christian Social Ethics in 1989-90.

When Fr. Vega returned to Puerto Rico, he wasassigned to Mayaguez  where he taught theology at the Pontifical Catholic University of Puerto Rico until 1994. Father Vega returned to San Juan in 1994 and began teaching at the Interamerican University as professor of Philosophy, Ethics and Christian Faith. From 2006 to 2008, he also taught philosophy to the seminarians of San Juan Bautista minor Seminary. In San Juan, Fr. Vega became a well-known and well-loved presence at San Ignacio Parish. He was especially known for his passionate homilies exhorting the parish community to cultivate a deeper sense of compassion for and commitment to the poor and underprivileged of our society. In 2015, he moved to the Hogar Santa Teresa de Jornet in San Juan, where he did pastoral ministry and cared for his health.

Father Vega graduated from Canisius Jesuit High School. He earned a bachelor’s degree in philosophy and a master’s degree in sociology, both from Fordham University. 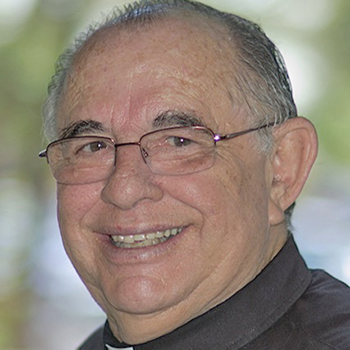