Jesuit Father Ralph E. Vonderhaar died on June 16, 2014, in St. Louis. He was 88 years old and a Jesuit for nearly 71 years. Born in Omaha, Nebraska, on Sept. 8, 1925, Fr. Vonderhaar entered the Society of Jesus at St. Stanislaus Seminary in Florissant, Missouri, on Aug. 8, 1943. He earned a B.A. in mathematics at Saint Louis University in 1949 where he also completed his philosophy studies. After teaching mathematics and Latin at St. Francis Mission is South Dakota and St. John’s College in Belize, Fr. Vonderhaar studied theology at St. Mary’s College in Kansas. He was ordained to the priesthood at St. Mary’s on June 19, 1957.

After ordination, Fr. Vonderhaar taught physics, chemistry and mathematics at St. John’s College in Belize. He then served as community minister and treasurer at St. Stanislaus Seminary from 1960 to 1967, where he also taught algebra and trigonometry. A quiet and humble man, Fr. Vonderhaar was very skilled in maintenance and repair of all sorts, and he put those skills to good use wherever he was assigned. He would also travel to Fraser, Colorado, during the summer to help with repair projects at the Jesuit summer lodge there.

In 1967, Fr. Vonderhaar began teaching mathematics at St. Louis University High, where he would serve for the next 24 years. Fr. Vonderhaar was a dedicated and demanding teacher. He was always well prepared for classes and expected his students to be prepared, too. At the same time, he appreciated the difficulty some students had with mathematics and gave them special attention to help them succeed.

In April 1992, Fr. Vonderhaar joined the Hallahan Community in St. Louis. Although serious hearing loss made some forms of ministry difficult, he generously helped with maintenance projects around the house and at St. Matthew’s parish and did occasional sacramental ministry at local parishes. He also frequently celebrated early morning Mass for the Franciscan Sisters of Mary. Fr. Vonderhaar was a faithful community member, regularly attending community prayer, Eucharist and meals.

In late 2008 Fr. Vonderhaar’s health began to decline. He joined the community at the Fusz Pavilion at Jesuit Hall where he continued to pray for the Church and the Society. Fr. Vonderhaar is survived by his brother, John, and his sister, Sr. Kathleen Vonderhaar, S.L. 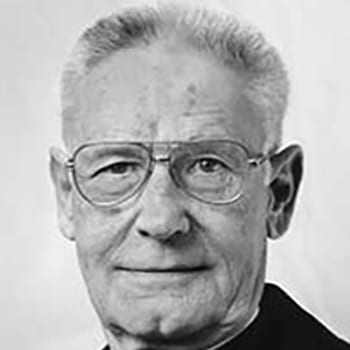