Jesuit Father James D. Wheeler died July 27, 2016, in Kansas City, Missouri. He was 93 years old, a Jesuit for 75 years and a priest for 62 years. He taught at Rockhurst University (formerly Rockhurst College) for 55 years.

Fr. Wheeler was born July 19, 1923, in St. Louis to John I. and Nan Donlan Wheeler. In addition to his parents, he was preceded in death by his brothers W. Garrett Wheeler and John I. Wheeler, Jr. and sister Catherine Wheeler Campbell. He is survived by numerous nieces and nephews.

He attended St. Louis University High School before graduating from Iona School in New Rochelle, New York, in 1941. He entered the Society of Jesus at St. Stanislaus Seminary, Florissant, Missouri, on Aug. 17, 1941, and was ordained on June 16, 1954. He pronounced his final vows on Aug. 15, 1957.

Fr. Wheeler’s teaching career at Rockhurst College (now University) began in 1956 and continued almost uninterrupted until his retirement in 2011, save for the time he worked on his doctorate (1963-65) and a year’s sabbatical at Southwest Missouri State in Springfield.

At Rockhurst, he taught chemistry and helped shape the pre-med program. For several years, he was a department chair. He was known for celebrating a late-night Mass in one of the Rockhurst dorms for the benefit of students staying up late studying. He was dedicated to the pre-med students as well as others he taught and helped alumni stay in touch by circulating a newsletter for several years, ending in 2012, shortly after his retirement. Alumni often mentioned how they appreciated his mentoring.

He earned a number of degrees from Saint Louis University: a bachelor’s in philosophy and English, a Ph.L. in philosophy, and a master’s in chemistry. He studied theology at St. Mary’s College in St. Marys, Kansas, where he received the S.T.L. He earned a Ph.D. in chemistry from the University of Missouri in Kansas City in 1965. 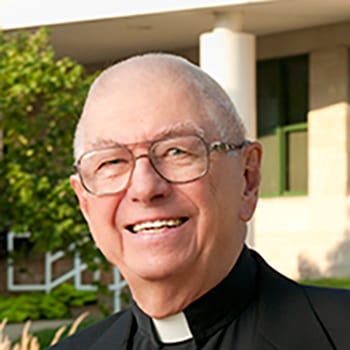