He earned a degree in civil engineering from Tulane University in New Orleans in 1945 and a master’s degree and doctorate in math from Catholic University in Washington, D.C., in 1958 and 1961 respectively. He also earned a license in sacred theology from Woodstock College in 1964.

Fr. Whitman spent his Jesuit career as an academic, researcher and research scientist. He started out teaching and leading a department at Loyola University New Orleans in the late 1960s. He also taught at the University of Houston from 1967 to 1974 and was a visiting professor and, later, an associate professor at Pontifical Catholic University of Rio de Janeiro in Brazil from 1974 to 1988.

In 1963, Fr. Whitman co-founded the Clavius Group to bring together lay and religious mathematicians in the summer for a community of research in the context of faith. The group took its name from Christopher Clavius, the 16th century German Jesuit mathematician and astronomer who modified the proposal of the modern Gregorian calendar that we still follow today.

Fr. Whitman’s involvement with the group reflects his lifelong dedication to linking mathematics and faith. “If this does not seem too exaggerated,” he wrote in 2003, “my mathematics that I do is a prayer. One faces naked and beautiful truth when he does mathematics. One cannot win in this game by banging the table, or claiming the wisdom of old age, or pretending. Either your logic works and can be acknowledged by others or it does not. And when it does, say after a proof that carries through several pages, you are in the presence of the Divine.”

Fr. Whitman’s research evolved around the topic of differential geometry. The Jesuit mathematician was an adjunct researcher at the Vatican Observatory in Tucson, Arizona, from 1982 to 1998, and he lectured in math at College of the Holy Cross in Worcester, Massachusetts, from 1989 to 1996. He was a research scientist and mathematician at the Vatican Observatory in Tucson from 1998 to 2010. In 2011, Pope Benedict XVI awarded him the Holy Cross Pro Ecclesia et Pontifice, a special honor given for distinguished service to the Church. In his later years, he was a mathematician and writer at St. Charles College and a writer-in-residence in New Orleans and Grand Coteau. 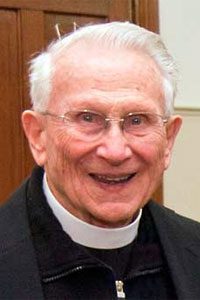