Father Zupez donated his body to science. A Memorial Mass will be held Tuesday, March 16 at 7:15 p.m. at St. Francis Xavier College Church in St. Louis.

He was born in St. Louis on Oct. 21, 1936, to John A. Zupez, Sr., and Cecelia Hartman Zupez. He was preceded in death by his parents and is survived by his sister, Joan Kiburz; two nephews, Jack and William Kiburz; and a niece, Ann Kiburz.

After graduating from St. Louis University High School, he entered the Society of Jesus at St. Stanislaus Novitiate in Florissant, Mo., on Aug. 17, 1954. He pronounced first vows Aug. 22, 1956 and was ordained to the priesthood at St. Francis Xavier College Church in St. Louis on June 7, 1967.

Fr. Zupez returned to the United States in 2006, serving in pastoral ministry from the Xavier Jesuit Center in Denver, 2006-2009, with one year of associate pastorship at Ave Maria Parish in Parker, Colo., 2007-08. From 2009 to 2013, he served as pastor of Corpus Christi Parish in Oklahoma City, Okla., and from 2014 until 2020, he was a prison chaplain in the Diocese of Kansas City-St. Joseph. He was assigned to Jesuit Hall in the summer of 2020.

Influenced early in his life by the Church and the Society of Jesus’ push for social justice, he looked for ways to promote social justice in his teaching, his work in seminaries in Africa, and in his African American parish in Oklahoma City.

Even as an octogenarian, he had extraordinary energy—and he never did anything halfway. Up until his final month, he continued to write articles for Catholic magazines and newspapers and was always looking for what more he could do.

We remember with gratitude all that God has done through Fr. Zupez’s life of service to God and God’s people. 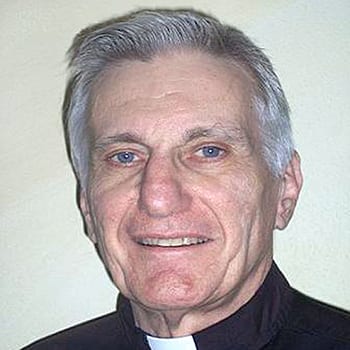