The Faith that Does Justice

Jesuits believe that Christian faith demands a commitment to justice. This means confronting the structures of our world that perpetuate poverty and injustice. As the religious order declared at its 32nd General Congregation in 1975: “The mission of the Society of Jesus today is the service of faith, of which the promotion of justice is an absolute requirement.”

This mission takes many forms, including works of service, justice, dialogue, and advocacy around the world.

A Glimpse at the Social Ministries of the UCS Province

Social ministries of the UCS Province are linked closely with other apostolic institutions. They help animate these apostolates to greater solidarity and concern for the poor, the marginalized, the migrant. Our apostolates have taken seriously the call of GC32 to the intrinsic link between justice and faith. The ministries highlighted in this glimpse are representative and by no means complete, but this gives an overview of some of the ways that our parishes, universities, and some “stand-alone” social ministries affiliated with the Society of Jesus are walking with and serving the marginalized and poor and promoting social justice. All of the secondary and pre-secondary schools in the province have strong service components, but these are not included in this overview.

"The mission of the Society of Jesus today is the service of faith, of which the promotion of justice is an absolute requirement." GC 32

The Jesuit Grants Collaborative’s mission is to support Ignatian and faith-based ministries’ ability to serve the poor and disenfranchised with the optimum level of resources and increased financial stability. Since the beginning of the Jesuit Grants Collaborative in 2005, nearly $19 million has been raised through grants for ministries, schools and other faith-based apostolates. The Grants Team includes two professional grant writers and a grants manager. The Grants Collaborative Partners pay for a ‘share’ of the grant-related services – up to 300 hours of research, writing, editing, packaging, tracking, reporting etc. of foundation, corporate and government grants in support of their mission. Partner organizations work with the Grants Team to decide how they wish to use their share of services, to identify funding priorities, and to create project calendars based on funder deadlines. One of the primary benefits of partnership with the Jesuit Grants Collaborative is that the collaborative effort makes high quality grant writing affordable and accessible to smaller organizations that cannot afford, or do not require, a full-time grantwriting staff.

Prison Ministry – Jesuits preside at liturgy, provide spiritual direction, and offer 12 step classes to inmates in the country’s only prison. 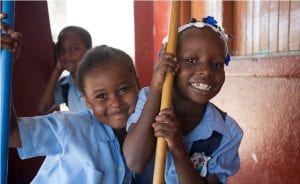 Project HEAL is an NGO affiliated with St. Martin de Porres parish in Belize City that provides counseling, literacy and other services for the students of the parish school and their families. Services include a wide variety of preventive, curative, psycho-educational and enrichment activities for students, most of whom have had a family member who has been murdered or experienced violence.

Belize 2020 is a non-profit volunteer organization focused on improving the quality of life in Belize by supporting Jesuit ministries in the country by linking the people of Belize with supporters in the United States. Their primary emphasis is on education as a key solution to the problems of drug-gang violence, unemployment, forced immigration and family instability.

Ministry to Migrants: Frs. Louie Hotop, SJ, and Brian Strassburger, SJ, provide pastoral and sacramental ministry to migrants in the Rio Grande Valley on both sides of the US-Mexico border. They make regular visits and bring donations to migrant camps in northern Mexico. They also help out and celebrate Mass at the Humanitarian Respite Center of Catholic Charities in McAllen, Texas. They are connected to local detention centers for unaccompanied migrant children, including celebrating a Mass on Sunday afternoons. And they started a podcast, called the Jesuit Border Podcast, which you can find online or wherever you get your podcasts.

Regis University offers students and faculty many opportunities for service and action for justice. Some unique examples: 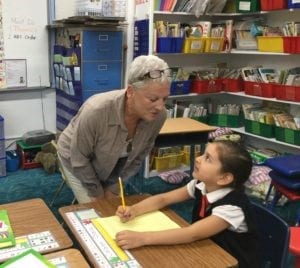 Ignatian Volunteer Corps Denver – IVC matches retirees with organizations serving poor and vulnerable people where they work 1-2 days a week. All volunteers also meet individually with a spiritual reflector and together as a community monthly to connect their faith with their service. 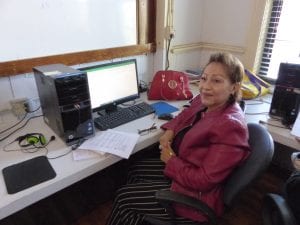 Sacred Heart Parish – The Centro Pastoral Social is located adjacent to the church and offers a variety of services to help individuals and families, many of whom are recent immigrants, rise out of poverty through immediate assistance to meet basic needs and overcome economic insecurity through practical, accessible and affordable education courses.

The Encuentro Project – The Encuentro Project offers programming and lodging for immersion and encounter experiences in the El Paso-Ciudad Juarez border region which include: direct work with asylum seekers, migrant, immigrant and/or refugee persons; education in Catholic Social Teaching and on border/migrant realities and projects through site visits; evening reflection and spiritual accompaniment. The Project is an inter-congregational ministry of the Jesuits of El Paso and the Marist Brothers.

The Thensted Center assists and educates underserved residents in rural Grand Coteau and the surrounding area, serving more than 200 families-in-need annually, including seniors, single parents, veterans, and the homebound, with a commitment to aid any person who seeks help. Tutoring services and a summer camp are offered for area children. While independently operated and incorporated, the Center is affiliated with St. Charles Borromeo Parish.

St. Francis Xavier Parish has an active Justice and Life Committee that serves as the umbrella for all parish social action efforts and informs parishioners by sending out legislative and other action alerts from Jesuit organizations based on Catholic Social Teaching. Some of the ministries sponsored by the parish include a legal clinic, food pantry, community garden, Sister Parish (in Belize City), and detention ministry. A Sustainability Committee provides educational and advocacy opportunities related to environmental stewardship.
Rockhurst University – Some of the unique faith-justice ministries of the university include: 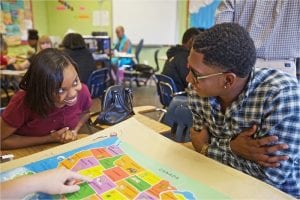 Spring Hill College sponsors the Foley Center which coordinates the service work of more than 400 students through partnerships with nearly 50 nonprofit organizations. Students work with healthcare providers, special needs organizations, elderly care facilities, education programs for both children and adults, and many other programs that provide for the needs of underserved and marginalized people in the Mobile community.

Jesuit Social Research Institute (JSRI), which is jointly sponsored by the Jesuits USA Central and Southern Province and Loyola University of New Orleans, works to transform the Gulf South through action research, analysis, education, and advocacy on the core issues of poverty, race, and migration through the lens of Catholic Social Teaching.

Loyola University of New Orleans – In addition to the Jesuit Social Research Institute, Loyola sponsors other social service and justice initiatives such as:
The Harry Tompson Center is a day shelter for the homeless where a variety of services are provided, including attending to basic hygienic needs, as well as attempting to find employment, housing, counseling and treatment for addiction and mental illness providing a degree of dignity and comfort to the chronically homeless, with the goal of re-integrating as many of the homeless as possible back into mainstream society. The Center was founded by Fr. Harry Tompson, SJ, and is closely affiliated with Immaculate Conception Parish in downtown New Orleans.
Ignatian Volunteer Corps New Orleans matches retirees with organizations serving poor and vulnerable people where they work 1-2 days a week. All volunteers also meet individually with a spiritual reflector and together as a community monthly to connect their faith with their service.

Caminando con Caimito is the newest ministry of the Jesuits of Puerto Rico, still in its formation stages. Once fully established, this center in the heart of one of the poorest neighborhoods of San Juan will provide space and resources to enhance the academic, psychosocial, cultural, and spiritual experiences of members of the community.

St. Francis Xavier College Church has a vibrant social ministry that provides both service and justice opportunities for parishioners, including:

Saint Louis University has an intentional commitment to the broader St. Louis and the global communities through initiatives such as:

Ignatian Volunteer Corps St. Louis – The UCS Province sponsors the IVC, which matches retirees with organizations serving poor and vulnerable people where they work 1-2 days a week. All volunteers also meet individually with a spiritual reflector and together as a community monthly to connect their faith with their service. The St. Louis IVC has 40 volunteers. 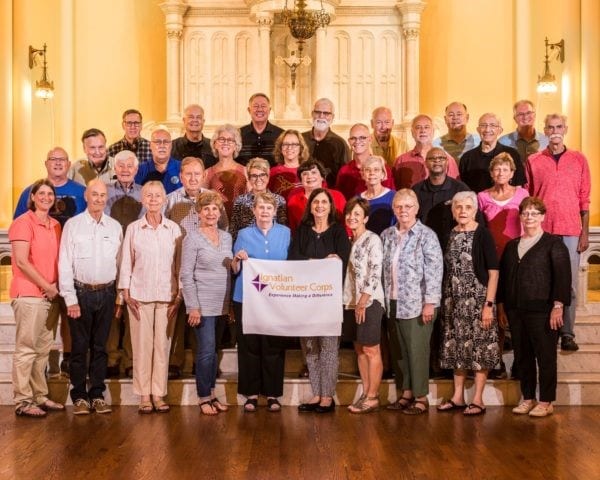 The primary purpose of the Jesuit Committee on Investment Responsibility (JCIR) is to advocate for and effect change in corporate behavior by coordinating shareholder advocacy initiatives at both the province and national levels. JCIR province representatives collaborate to identify economic justice priorities and to work together to promote corporate social responsibility consistent with just sustainability in the community, the environment, and the economy.

Socially responsible investment (SRI) is, for Jesuits, the work of structural justice. It involves using the investment portfolios of the seven U.S. Jesuit provinces as well as the two Canada Jesuit provinces to influence corporate policy decisions that determine corporate operation in this country, and throughout the world. Jesuits also have the opportunity to make investments in places where traditional investment moneys do not flow, such as in community development loan funds which help develop the human capital, economic infrastructure and affordable housing stock in underserved, undercapitalized areas.

Rooted in the faith that does justice, the Jesuit Social Research Institute works to transform the Gulf South through action research, analysis, education, and advocacy on the core issues of poverty, race, and migration. The Institute is a collaboration of this province and Loyola University New Orleans. Learn more about JSRI in this video: