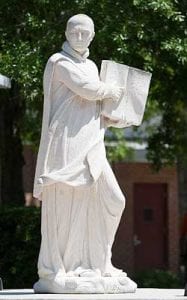 Throughout much of the world, Jesuits are known for their colleges, universities and high schools. Their distinctive spirituality attracts even more people who are searching for greater meaning and faith. St. Ignatius Loyola, founder of the Jesuits, developed a way of praying that helps people “find God in all things.” That is the signature spirituality of the Jesuits.

Ignatius was a Spanish courtier and aristocrat who found his true calling after suffering nearly fatal wounds on a battlefield. He gathered a small group of companions and established the Society of Jesus in 1539, united in a method of prayer patterned on his own experience of conversion.

Ignatian spirituality is grounded in the conviction that God is active in our world. As the great Jesuit paleontologist Pierre Teilhard de Chardin wrote: “God is not remote from us. He is at the point of my pen, my pick, my paintbrush, my needle—and my heart and my thoughts.” The spiritual path laid out by Ignatius is a way of discerning God’s presence in our everyday lives. And doing something about it.

The Jesuits have a training manual for this search. It is the Spiritual Exercises of St. Ignatius Loyola, composed by the saint before he was even a priest. Often described as Ignatius’s greatest gift to the world, these exercises unfold a dynamic process of prayer, meditation, and self-awareness. The basic thrust is to make us more attentive to God’s activity in our world and  more responsive to what God is calling us to do. Ignatian retreat directors guide people through the Exercises in retreat houses, parishes and other settings.

Ignatian spirituality is not merely an inward journey, much less a self-absorbed one. It aims to bring people more deeply into the world—with gratitude, passion, and humility—not away from it. Ignatius called on the Jesuits to be “contemplatives in action.” Today, Jesuits and their lay collaborators work with people in many walks of life, such as education and business. They help nurture “men and women for others.”