Filling Jars with Water: The Office of Ignatian Spirituality 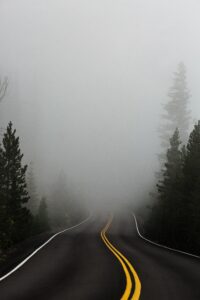 If you have ever driven a California coastal highway through dense fog, you understand what an adventure that can be. Intensely aware that you are surrounded by majestic beauty, all you can really see is the road immediately before you, occasional “curves” signs, and glorious redwoods standing at reverent attention. A welcome moment on this meandering route comes when a sudden burst of sunlight puts the entire journey into clearer perspective.

Such a clarifying moment came for me while seated among brother Jesuits and sister collaborators at the Jesuit USA Central and Southern (UCS) Province’s inaugural retreat focused on women in mission with Jesuits.

I was awestruck by what I observed. Each person represented some wonderworking of the Lord unfolding in his or her respective apostolate. At the same time, something fresh and new, unclear yet beautiful, was happening in our midst.

A Jesuit seated beside me casually asked, “How goes it with the OIS?” referring to my work with the province’s Office of Ignatian Spirituality. My spontaneous answer became a dwelling place for much ongoing reflection: “We are filling jars with water. The rest is up to Jesus.”

“Do whatever he tells you.”

Amazing things happen when people gather and invite Jesus into their midst.

Pre-pandemic, the province’s Commission on Mission and Ministry recommended that the UCS Province establish an office to promote collaboration in advancing the ministry of the Spiritual Exercises in the province. Father Provincial Thomas Greene, SJ, followed the recommendation and confirmed the Office of Ignatian Spirituality (OIS) into existence at the outset of the Ignatian Year, in May 2021.

“When the wine ran short …”

Every gathering has its context. And no matter how much a host plans, circumstances have a defining impact.

Whatever the conceivers of the OIS intended, the pandemic has shaped the vision of the OIS as well as its manner of proceeding. The mission of the OIS is clear: to “show a pathway to God” by creatively sharing the Spiritual Exercises, assist with the “formation of formators,” and foster “collaboration and networking” among Ignatian ministries. How this mission has unfolded continues to be like an adventurous drive through the dense fog on the coastal highway.

New ways of gathering were required, new communities developed, new needs came to light. And newness inevitably brings with it myriad questions, frustrations and occasional mishaps. Opening amid a global pandemic and at the outset of an Ignatian Year, the OIS began with a flurry of activity. Setbacks, both visible and invisible, were inevitable. Thankfully, one stabilizing truth abides: those employed, those volunteering, those donating, and those collaborating with the OIS from across the province and beyond are as edifying as the towering redwoods which stand along a glorious coastal path.

“Fill the jars with water.”

In Cana, Jesus makes use of what is at His disposal. The OIS is developing the capacity to create several types of “sacred spaces” instrumental in facilitating encounters with the Lord.

The OIS also works with province entities to create sacred spaces for in-person encounters. Our new way of sharing the Exercises has found a new home, thanks to the assistance of donors and province resourcefulness. We have renovated the Xavier Jesuit Center in Denver to stand as the new OIS-Denver. It will serve as a venue for formative Ignatian teaching, seminars, gatherings and retreats, as invitations arise. 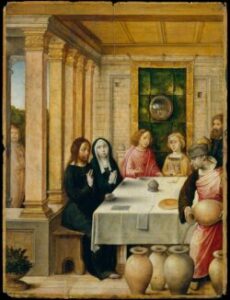 In all of these sacred spaces, people seek a personal encounter with Jesus. Traditionally, retreatants experience “preached” or “silent-directed” retreats to grow closer to God. The OIS approach combines elements of “preached” presentations with the sacred space of “silence” at home or at the retreat house by means of Zoom and onsite individual spiritual direction.

This new way of sharing the Exercises bestirs abundant graces, with retreatants witnessing to the powerful impact of an encounter where God continues to be faithful and ever so generous.

A final “vessel” OIS strives to fill when invited is the formation of Ignatian leaders and directors. Ignatian Seminar and Theological Dynamics of the Spiritual Exercises will be re-introduced this fall, and an updated version of the Forming Sacred Spaces workshop rests in the background as the road ahead continues to unfold.

“So, they filled them to the brim.”

I have often wondered where the wedding servers go to find the water necessary for Jesus’ wonderworking. For the UCS Office of Ignatian Spirituality, that source of grace is the Spiritual Exercises themselves. But for me, it is the font of collaboration and networking with dedicated men and women of the Exercises from which the greatest graces flow.

We don’t fill the jars by ourselves. A steadfast community of Ignatian ministers from across the province continues to assist and form the adventures ahead. Loosely known as a “Consortium,” modeling their relationships and way of proceeding after those of the first friends in the Lord, this geographically diverse group meets regularly to engage in communal discernment, thereby profoundly impacting the landscape of the ministry of the Exercises in the province and how the OIS continues to be fashioned.

The wedding servers must have wondered what was taking place. What could the young preacher possibly do? Even he sounded reluctant because it was not his time. After all, the wedding ran out of wine, not water. Similarly, the OIS “big picture” continues to elude me.  However, my email inbox serves as a clear signpost for the road immediately before me.

So, I continue to fill the jars faithfully at the tug of the inner Spirit and the ongoing conversation among companions and colleagues, trusting that wherever the road leads will be up to the Lord.

And the dance and the joy of the wedding feast carry on.

– Patty Feder administers the Office of Ignatian Spirituality for the Jesuits USA Central and Southern Province.