Going Where Needed: From the Classroom to the Hospital Room

“We were a week or so into quarantine, when the TV stations ran a story about the high school donating a bacteria-zapping robot to the hospital,” he said. “It got me thinking: the robot is working hard to help with the pandemic, and here I am sitting on my keister.”

The high school that made that donation was Jesuit High New Orleans, which lent its germ-killing robot to East Jefferson General Hospital, where it is being used to help the hospital keep up with the large number of COVID-19 patients. Before the stay-at-home orders forced the school to send students home in mid-March, Fr. Dyer worked at Jesuit High as a theology teacher and chaplain. Working remotely meant he had time on his hands. So, after getting approval from his Jesuit superior, he contacted Dr. Peter Deblieux, a Jesuit High parent and Immaculate Conception Parish member, and offered his services. As Chief Experience Officer at University Medical Center, Dr. Deblieux “jumped in” and paved the way for Fr. Dyer to work as a chaplain at the hospital. University Medical Center in New Orleans.

“I prayed to God to open doors for me to serve, and I am so glad those doors opened,” Fr. Dyer says. “This has been a most profound time in my life as a Jesuit and a priest.”

The new hospital chaplain goes to the medical center six or seven days a week to visit patients throughout the building. He starts each day with the non-coronavirus-positive patients and ends his day with the patients suffering from COVID-19. When he first began working at the medical center, he received training in the correct use of personal protective equipment. He brings his own with him.

He prays with patients and brings the Eucharist to those who can receive it. He spends a lot of time listening, sometimes as confessor. And he anoints the most seriously ill. He tries to read all the obituaries of the people he’s ministered to who don’t survive. It helps him to get to know them as people, rather than patients.

“With the COVID patients who are very ill, my visits tend to be short,” Fr. Dyer says. “For those who are feeling better, but still test positive, I’ll stay longer because they need the company.”

He has been impressed by the medical center’s holistic approach during this challenging time. “University puts real emphasis on patient and family care,” Fr. Dyer says. “They recognize how hard the isolation is on both patients and their families. The sickest patients are receiving the attention they need, while at the same time, a pastoral team member is communicating with the families. It is really encouraging to see what can happen when health care is intentional.”

Another aspect of Fr. Dyer’s job is his ministry to the staff of the hospital. In the early days of the pandemic, hospital staff, particularly nurses, found themselves on the frontlines of a constantly changing battlefield. Long hours in emotionally charged circumstances meant that patients were not the only people who needed care.

“Mostly, my role there was to be a source of encouragement, someone to recognize the good work they were doing and show them some honor,” he said. 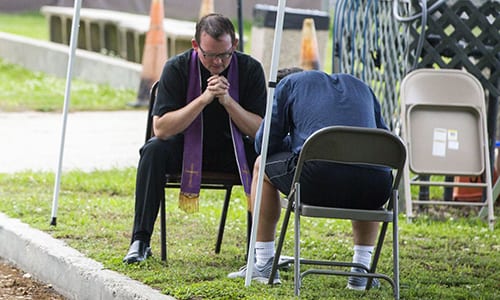 His hospital schedule is flexible to accommodate his other work. In addition to his role at Jesuit High, he is also a part-time chaplain for the Fellowship of Catholic University Students (FOCUS). During the stay-at-home orders in New Orleans, that means he is providing spiritual direction by phone or computer.

Since he began hospital ministry, Fr. Dyer has lived alone in a Jesuit residence to protect the members of his Jesuit community. “It’s not as lonely as I expected,” he says. “I’m staying connected with my New Orleans community by phone and video calls, as well as Jesuits and others from all over.”

Despite the emotional challenges of this ministry, Fr. Dyer describes his role as a blessing because of the wonderful people he’s been able to work with and care for.