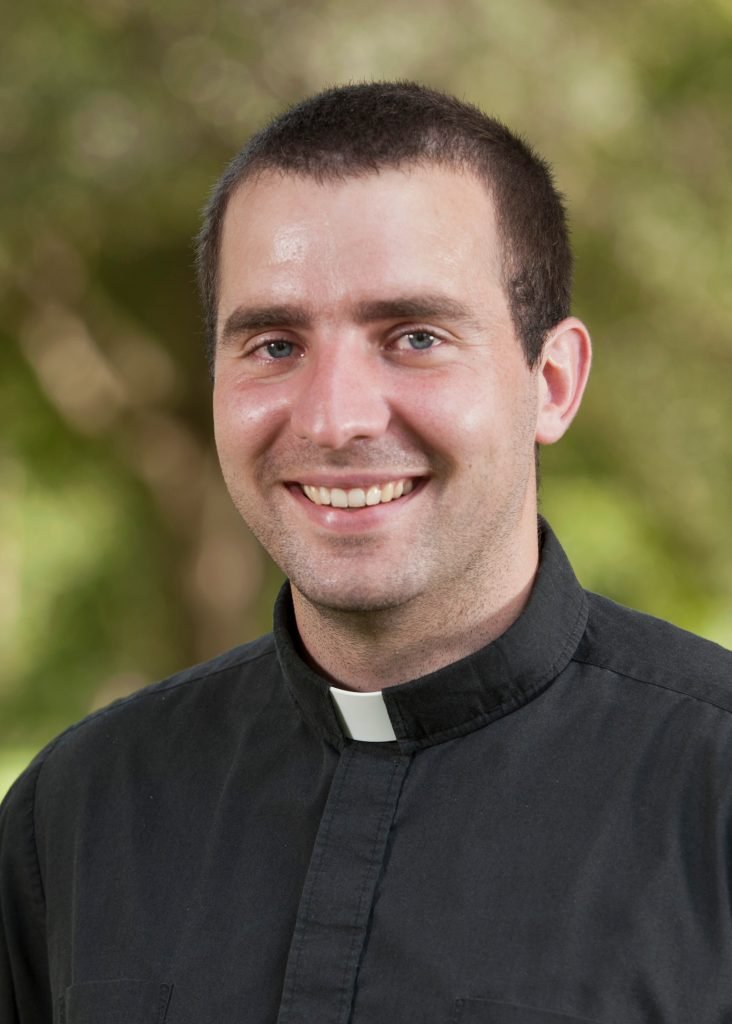 Jonathon Polce, SJ, seeks to follow God’s plan one step at a time.

Growing up in a large Catholic family in small-town Connecticut, Polce was homeschooled for his K-12 education before attending the University of Dallas, a Catholic institution. After graduating in May 2009 with a bachelor’s degree in history, Polce found work as a resident assistant at UD’s Rome campus.

One of the chaplains at the Rome campus happened to be a Jesuit, the first Jesuit Polce had ever met. In time, he became Polce’s spiritual director. Polce began to discern whether he was called to a religious vocation.

“I started to consider religious life, but had a lot of fears,” Polce said. “I wondered about how a religious vocation would impact my relationships with family and friends and worried that I was called to have a wife and children. It seemed like such a huge commitment.”

While weighing his options, Polce returned home for Christmas in 2010. While there, he had a transformative conversation with his father, who had returned to the Faith several years before, after years of not practicing.

“He encouraged me to pursue a religious vocation and got that message through to me by reframing my anxieties about the long-term commitment as, ‘Is this what God is calling me to do right now?’

“Once I saw a religious vocation through that new lens – of being a ‘next step’ in following God’s plan as opposed to worrying about lifelong implications – I made up my mind,” Polce said.

In making that decision, he put Pope Francis’ words into action: “Faith is not a light which scatters all our darkness, but a lamp which guides our steps in the night and suffices for the journey.”

When he returned to Rome for the spring semester, Polce informed his spiritual director that he had decided to pursue a religious vocation. Over the previous year, Polce had gotten to know the Jesuits through his spiritual director, so he wanted to explore a vocation in the Society of Jesus.

Polce entered the novitiate in the fall of 2011. After two years of novitiate, he studied philosophy at Regis College in Toronto, completed his ministerial assignment teaching at Strake Jesuit College Preparatory of Houston and is currently studying theology at Boston College School of Theology and Ministry.

He hopes to be ordained to the priesthood in June 2022.

Initially daunted by the length of the Jesuit formation process, Polce has found it to be one of the greatest blessings in his vocation, for it has allowed him to focus on following God’s plan, one step at a time.

“The Jesuit formation process is intentional,” he said. “Every step of the way, I have been given assignments where the Lord has pushed and stretched me, and come out of each experience a better man, a better Catholic and a better Jesuit.”

In his active ministry, Polce is excited about many possibilities: returning to an educational setting, going abroad again and incorporating food – he has a passion for cooking – into his ministry.

But he has now learned not to worry about what is far ahead, remaining focused on what God has planned as his next step.

“I can’t wait to be ordained a Jesuit priest,” he said. “Whatever ministries that God has in store for me, it will be a blessed adventure.”