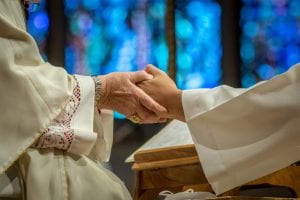 The journey to becoming a Jesuit priest is famously long. For Jesuits David Lugo and Matthew Stewart of the USA Central and Southern Province, the coronavirus pandemic made it just a bit longer. Ordinations in this province usually take place the second Saturday in June, but for the health and safety of all who would attend, province leadership made the decision to postpone. That’s how it came to be that Lugo and Stewart were ordained to the priesthood on Aug. 15, 2020, the Solemnity of the Assumption of the Blessed Virgin Mary and exactly 11 years from the date of their entrance into the Society of Jesus.

Archbishop Robert Carlson, apostolic administrator for the Archdiocese of St. Louis, presided at the liturgy at St. Francis Xavier College Church in St. Louis. Archbishop Carlson began his homily with the question, “Do you love Mary as your mother?” Both Lugo and Stewart were quick to assure him that they do. “That’s good,” said the archbishop. “The ordinations can go on.”

The ordination did go on, following the age-old rite, with just a few adjustments for safety’s sake. Father Provincial Thomas P. Greene, SJ, called each man by name and presented him to Archbishop Carlson, and assured the prelate that each had been found worthy, to the applause of the congregation. Those gathered numbered no more than 200, another precaution, but hundreds more joined via a livestream.

In a moving sign of humility, Lugo and Stewart lay prostrate on the floor while the Jesuit choir implored the saints to intercede on their behalf. Then Archbishop Carlson and all other priests in attendance laid hands on each. Archbishop Carlson blessed the men and anointed their hands with chrism and continued the Mass with two new priests.

Fathers Lugo and Stewart entered the Jesuit Novitiate on Aug. 15, 2009. Following two years as novices, both professed first vows and were assigned to studies at a Jesuit university. Since then, their paths to the priesthood reflect the diversity of callings within the Society of Jesus.

David Lugo, SJ, was born in the Dominican Republic and immigrated to the United States at a young age with his parents and two younger brothers, eventually settling in Houston. After pronouncing first vows, he completed a master’s degree in philosophy at Saint Louis University. His regency (ministerial) assignment was at Jesuit College Preparatory School of Dallas, where he taught theology and mathematics for three years. He then earned two degrees from the Jesuit Theologate at Regis College in Toronto, Ontario, a Master of Divinity and a Bachelor of Sacred Theology.

He is currently studying Ignatian Spirituality and theology at Comillas Pontifical University in Madrid, Spain. After his ordination, he will return there to finish his Licentiate in Sacred Theology and serve as a priest at a Jesuit parish.

Matthew Stewart, SJ, was born and raised in the St. Louis area. He graduated from St. Louis University High School, where he became familiar with the Society of Jesus, and from Saint Louis University with a bachelor’s degree in music. He spent a year as a volunteer with the Alum Service Corps (ASC) program before being hired by his alma mater, SLU High. He entered the Society of Jesus after six years of pushing aside the call to religious life. Following his profession of first vows, Stewart completed a master’s degree in philosophy at Fordham University in the Bronx, N.Y., while teaching English as a second language to refugees at St. Rita’s Center in New York City.

Stewart was next assigned to the University of Denver, where he completed a master’s degree in choral conducting while also working at Regis University, where he taught theology, led the school’s Peer Ministry program and coordinated liturgy. He completed his Licentiate in Sacred Theology at the Boston College School of Theology and Ministry. During this time, he also served as a deacon at St. Brigid and Gate of Heaven parishes in South Boston.

Fathers Lugo and Stewart are among 15 Jesuits to be ordained to the priesthood this year in the United States, Canada and Haiti.

Photos of the Ordination Mass are available on SmugMug.

The video of the Ordination Mass is available on the province YouTube channel.

Fr. Rafael Garcia, SJ, Fulfills Vocation in Ministry with Migrants
After working his way to professional success as an architect, Fr. Rafael Garcia, SJ, found that his true calling in life is ministering to immigrant communities with needs similar to the one he grew up in.
Story
Justin Daffron, SJ: At the Service of Mission
Every baseball fan knows the value of a good utility player. For the Jesuits, Fr. Justin Daffron, SJ, has proved himself to be an outstanding utility player, serving in disparate roles at Jesuit universities in Chicago, St. Louis and New Orleans.
Story
On 40th Anniversary of JRS, Fr. Kevin Cullen, SJ, Reflects on His Experience
Jesuit Refugee Service has been helping people across the globe for four decades, providing the forcibly displaced with humanitarian aid and moral support.
Story
Scroll to Top
X
Tweet
Share
Pin