The Search for Safety: Why Women Flee their Countries of Origin 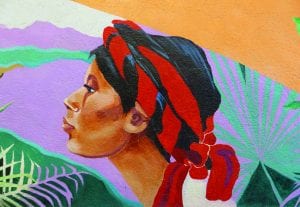 Today, around the world, people are on the move.
They are migrating to escape poverty, improve their livelihood and opportunities,
or escaping conflict and devastation in their own countries.
Women represent almost half of the 244 million migrants
and half of the 19.6 million refugees worldwide.
(UN Women – Women Refugees and migrants1)

18-year-old María* ran out the back of her home as local gang members crashed through the front, furious because María refused to accept being the girlfriend of a gang member. They had warned María the day before that they were coming for her final answer. Since the same gang – working together with the police – murdered her brother years before for refusing to join them, she had no doubt they were serious. She and her mother left that day, never looked back, and walked for three months to get from Honduras to the United States.

On their way through Mexico, local members of organized crime kidnapped them – a frequent occurrence for migrants – demanding money or that they call their family to send money for their release. Since María and her mother had no one to send money, the gang leader sexually assaulted María for three days in “payment,” threatening her mother the whole time. María and her mother finally reached the border of the United States and entered to ask for asylum. They sought protection because their own police and their own country denied them safety.

Every day, women flee their home countries, leaving behind family, culture, language, food and everything they know in search of safety for themselves and often for their children. No precise numbers exist, but in 2012, women comprised 14 percent of the apprehensions at the U.S./Mexico border; by 2017, they made up 27 percent of the apprehensions.2

I work as an immigration attorney at the U.S./Mexico border in El Paso, Texas. I represent asylum-seekers who are exercising their right to ask for protection in the form of asylum, guaranteed by U.S. law and by our legal obligation to the United Nations Refugee Convention.

What are the “push” factors?

What are some of the reasons why women choose to leave everything behind and head into uncertainty, possible detention and even possible separation from their children?

Turning your back on everything familiar takes courage; most often, it is a desperate act. What are the forces at work that “push” these women out of their home countries, leaving everything behind and heading into the unknown and possibly even detention?

“Women are forced to choose between facing certain death or a desperate journey north—protected by other families in the caravan.3 Women, especially those from El Salvador, Guatemala and Honduras, more frequently cite ‘fleeing violence’ as their reason for leaving home than men do.4 The perpetrators of violence know that gender-based crimes routinely go unpunished, and these three countries hold some of the highest femicide rates in the world.5 Individuals will not stop fleeing until the root causes of violence are addressed; the use of military troops or scare-tactics will not dissuade them, because currently there is no place scarier than their homes.”

An illustrative example is that of Claudia, an Indigenous Guatemalan woman who suffered sexual and physical violence and even false arrest and detention as a minor at the hands of a powerful ladino (non-Indigenous) family in her rural community.6 Given that the family was supported by the local police and a municipal judge, Claudia knew she would never be safe in her community, so she fled to hide in an aunt’s home in a small city nearby.  The same aggressors found her there and threatened her again. Only then did she resolve to abandon her family and leave the country.

Even in the face of threats and imminent danger, a woman is less likely than a man to flee her home country, because women are frequently responsible for the home and the family. If the man has abandoned the home or already fled, she alone supports the family and ensures economic survival. When a man flees, he may bring his family with him, but he often does not, leaving his partner the responsibilities of the home, children or aging parents.7

Like Claudia, a woman will more likely attempt relocation within the country first, with the hope that a short-term relocation will resolve the threat of violence and be less disruptive to her family. Should she then choose to flee her country, she will often take her children with her, which increases her vulnerability on the journey.8

Regardless of whether they travel alone or in a migrant caravan, women fleeing violence and journeying to the safety of asylum risk sexual assault, trafficking and exploitation en route. Already stricken by the trauma that forced their departure in the first place, women face inadequate food and medical care, risk of rape, beatings, abandonment and kidnapping.9

Multiple surveys and reports point out that more than half of the women interviewed experienced sexual assault during their journeys north, and many take birth control to avoid becoming pregnant from rape,10 recognizing that the issue is not “if” but “when” they will be assaulted.

Amnesty International reports that 60-80 percent of female migrants are raped traveling through Mexico on their way north.11

If a woman travels with children, she must protect her children, their few belongings and herself, find enough food to keep them going, and still be able to sleep at least enough to keep moving the next day. In one study, at least 70 percent of the migrants interviewed had at least one family member traveling with them.12

Women migrants often feel more protected from smugglers, kidnapping and police violence when they join a migrant caravan and travel together. However, the caravan leaders are usually men who ignore the reality of women, especially women traveling with children. Women with children move more slowly and may need more time at stops to eat, bathe and get food. They often have more medical concerns because of sick children, pregnancy issues, or just the responsibility of caring for others. Furthermore, caravan leaders may hold meetings and make decisions that exclude the voices and needs of women because women are unrepresented due to childcare and even security issues.13

Migrant caravan groups advance at the pace of the leaders or those in the front, often single men, frequently leaving behind women and families, further increasing their vulnerability on the journey. (Ibid.)

In one report, service providers and government officials expressed outrage that whenever a confrontation with authorities occurred on the journey, leaders pushed women and children to the forefront, perhaps with the expectation that police and military would be less violent facing women and children directly.(Ibid.)

Once they reach the U.S. border, women immigrants’ challenges continue, since U.S. policy has trapped them in Mexico through MPP (Migrant Protocol Protections or “Remain in Mexico”) and Title 42 (a public health law that gives the CDC and DHS authority to, in effect, shut the border, denying migrants the possibility of asking for asylum). Shelters run by governments or churches and private agencies host many of the migrants waiting in Mexico. However, women continue to be at risk for sexual and gender-based violence, forced prostitution, kidnapping, forced drug dealing, misconduct and human rights violations by authorities.(Ibid.)

Further, family separation still exists, as U.S. immigration authorities only recognize a parent or an adult with legal guardianship papers, and real families often include older siblings, grandparents or others as those responsible for children.

In one case, Valeria arrived with her 17-year-old son, Rueben, who was running from gang threats and imminent violence. Immigration authorities held them in a hotel together until he turned 18, at which point they separated mother and now-adult son, sending them to separate detention facilities with no explanation and no means to talk to each other. At Reuben’s first hearing before a judge, he asked for deportation because he did not understand what was happening, could not confer with his mother, and preferred to be home in Honduras rather than in immigration “jail” with no end in sight.

Finally, the vast majority of asylum seekers do not have access to legal representation, including more than 80 percent of those in detention, and they are trying to navigate by themselves a complicated system in a foreign language.14

If they want a chance at winning protection through asylum, women who have suffered violence, especially intimate or sexual violence, are forced to tell in detail what happened to them.

And yet they come. Women migrants come, to escape the violence they have suffered and the deaths they have witnessed at home, to seek the protection their own government does not provide. They come to protect their children. They come with the hope that the United States will honor its commitment to our own refugee law and the U.N. Refugee Convention we have ratified. And while the challenges of the immigration system are another story, those who arrive at our border are welcomed by community groups, faith-based groups and caring individuals.

María was released from immigration detention and is now in Michigan, supported by community organizations and her church, waiting for the day she can present her case to the judge and be granted asylum.

* Note: All names used in this article are pseudonyms.

4 “The Cycle of Violence: Migration from the Northern Triangle,” The Henry M. Jackson School of International StudiesTask Force Report, University of Washington, 2017. i-56.

6 Henry M. Jackson, confirming that “perpetrators operate with impunity due to the police and judges’ lack of enforcement of domestic violence laws and restraining orders, instead justifying inaction by citing the need to protect the rights of the perpetrators.” (p. 22)

8 Señales de una Crisis, see also Women on the Run, UNHCR 2015, more than 2/3 of the women interviewed, first tried to find safety by relocating in their own country, but they found that it did not help protect them. (p4)

9 “In Focus: Women Refugees and Migrants.”

10 Parish, Anja, “Gender-Based Violence against Women: Both Cause for Migration and Risk along the Journey,” Migration Policy Institute, Sept. 7, 2017.

Women of the Exercises: Spiritual Ministers Find Joy in Sharing Ignatian Spirituality
Paula Sapienza, Susanne Chawszczewski and Susan Friedrichsen are three "women of the Exercises." Each of them, through their respective work at a province retreat house, university, and spirituality center, guide many through the Spiritual Exercises of St. Ignatius of Loyola.
Story
Fr. Jason LaLonde, SJ: Always Open to God’s Call
Father Jason LaLonde, SJ, felt called to participate in God’s Church from a young age. Through career and vocational changes and moves across the country, LaLonde has retained one constant: an openness to whatever God is calling him to do.
Story
Jesuits Magazine: Winter 2021
We invite you to celebrate the women of the Jesuits USA Central and Southern Province with the first-ever Women's Issue.
Publications
Scroll to Top
X
Tweet
Share
Pin